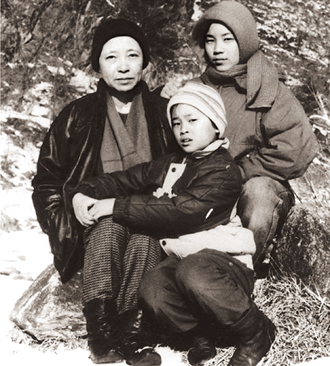 Shin Sook-ja and her daughters reportedly photographed at the Yodok concentration camp. A UN group concluded that they were detained forcibly in North Korea. [JoongAng Ilbo]

A UN working group concluded that the wife and daughters of a South Korean double-defector were detained forcibly in North Korea, contradicting Pyongyang’s recent claim that the daughters were voluntarily staying there.

Pyongyang also claimed in a letter to the working group this month that the wife, Shin Sook-ja, had died of hepatitis, which it hasn’t proven.

Miguel de la Lama, Secretary of the UN Working Group on Arbitrary Detention sent an official statement dated Thursday to the International Coalition to Stop Crimes Against Humanity in North Korea (ICNK), a civic group dealing with North Korean human rights, regarding the fate of the wife of Oh Kil-nam and their two daughters.

“The source [Mr. Oh] has made out a prima facie case that Ms. Shin Sook-ja, Ms. Oh Hae-won and Ms. Oh Kyu-won have been held in detention for many years, without any legal basis justifying their deprivation of liberty,” the statement said. “The continued detention since 1987 ... has been and is arbitrary.

“The [North Korean] government has not provided information about the current situation of Mr. Oh Kil Nam’s two daughters nor on the circumstances of Ms. Shin Sook Ja’s reported death,” the statement continued. “The Working Group requests the government to take the necessary steps to remedy the situation, which are the immediate release of, and adequate repatriation to, these persons.”

Shin, who was a nurse in Germany, married Oh in the 1970s and birthed two children there. The family decided to defect to North Korea in 1985 after they were persuaded by North Korean agents. However, the North’s system soon disenchanted Oh, and in 1986 he defected, leaving his wife and daughters behind.

Sources say Shin and her two daughters reportedly were being held at a prison camp in the North until at least recently.

The working group’s response came after Pyongyang sent it a letter dated April 27 that Shin “died of hepatitis, which she suffered from since the 1980s” and that the couple’s two daughters “do not regard Oh as their father” and “strongly refuse to deal with Oh and asked not to be bothered anymore.”

It was the first time Pyongyang had reacted to the case.

Oh and supporters of his campaign to free his family demanded details on Shin’s death and the daughters’ whereabouts and a meeting with them in a third country.

“North Korea’s claim about Shin’s death isn’t able to be verified at all,” Kwon Eun-kyung, a manager of the ICNK who received the letter from the UN group, told the Korea JoongAng Daily. “The UN Group’s statement means that the group accepted Mr. Oh’s claim that the three women have been detained.”