Lee Dae-ho crushes it in Japan

Lee Dae-ho crushes it in Japan 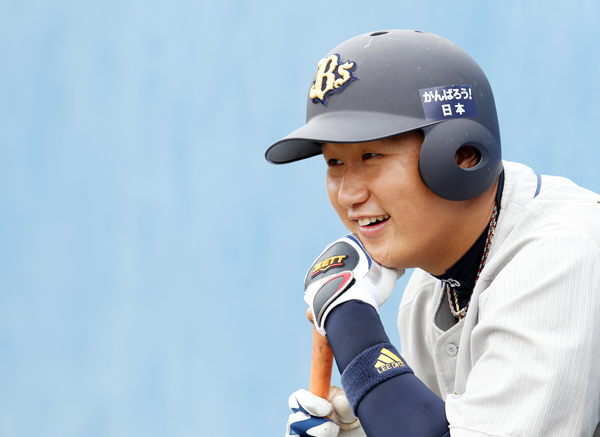 Orix Buffaloes’ Lee Dae-ho rests during his practice session. Lee has been hitting well in May in the Nippon Professional Baseball league. By Kim Jin-kyung


Orix Buffaloes Korean slugger Lee Dae-ho seems to be finding his hitting stroke. On Monday, against the Yokohama DeNA Baystars, the 30-year-old former notched his 10th home run of the season and became the home-run leader in the Pacific League of Nippon Professional Baseball.

Lee only had 2 home runs in 24 games in April - but so far in May he has bashed 8 home runs in 22 games. Some Japanese media outlets are saying Lee is a top candidate for MVP of the month.

Mathematically, Lee is on pace to collect 30 home runs and 84 RBI. Some are speculating that he could have the best debut year performance among Korean batters in the NPB. Hanwha Eagles’ Kim Tae-kyun, who previously played with Chiba Lotte Marines marked a 0.268 average, 21 home runs and 92 RBI in his debut year in 2010.

Lee suffered a calf injury on Monday, but showed spirit by appearing against the Chunichi Dragons yesterday. In an interview with the JoongAng Ilbo Sunday in Yokohama, Lee said that he is doing well.

No Korean batters have won the home run title in the NPB. Lee Seung-yeop came close in 2006 when playing for the Yomiuri Giants with 41 home runs, but in the end he finished second. Now, local baseball fans are watching closely to see whether Lee can be the first Korean to claim the home-run title in Japan.

Q. It seems you’re crushing it in May. Do you think you’re adjusted to Japanese baseball?

A. At first, I wasn’t swinging well because I felt pressured to perform. I watched pitches closely, but that somehow turned me passive at bat. It turns out I should have played like I played in Korea. When I changed my mindset, I was able to swing freely and then I started producing home runs.

You seemed to go for higher pitches that are usually out of the strike zone.

That’s what has changed for me. In Korea, I tried to broaden my hitting zone and even if the pitch was a ball, I swung at it. But in Japan, if the pitch was a ball, I didn’t swing at it. But I overcame that mindset and that’s why my home runs are happening. But I still don’t think my rhythm is at my best. I want to get a lot of hits and get my batting average up to a solid 0.300.

Do you think you have adjusted to Japanese pitchers’ breaking balls?

Japanese pitchers’ breaking balls are sharp, but after all, it’s still a pitch from another human. Top Korean pitchers like Ryu Hyun-jin or Yoon Suk-min sometimes deliver careless pitches. Japanese pitchers have pin-point control, but I’ve also met great pitchers in Korea. Although they don’t make weak pitches often, I don’t miss them when they come.

What do you think about your team performance so far?

I feel confident about our team’s performance. In the earlier season, I struggled, but my manager and teammates trusted in me and I was able to find my pace. There was a lot of pressure at the start of season. Since there are lot of games left, I believe we will climb up in the league step by step.

You have now spent more than three months in Japan. Do you still face difficulties?

It was tough from the start. It wasn’t easy to adjust to foreign soil even if I prepared firmly. I tried to maintain a positive attitude. Even if I struggled early, it’s fortunate that I found my rhythm in May.

Who do you think of most when you have a difficult time?

It has to be my family. My wife brings me tasty food and tells me lot of anecdotes that make me energetic. My wife and daughter are currently in Korea, but I really miss them. I chat by phone with my former Lotte teammates, too.

Do you check how your former team is doing in the KBO?

Sometimes, even if my team loses, I feel relieved by watching Lotte win.

Not only Giants fans, but actually baseball around the nation are supporting you.

I heard the popularity of baseball became bigger than last year. I really thank fans: not only for supporting me, but for caring about baseball. I want them to enjoy baseball at the stadium. I will try to deliver more good news in Japan.
By Yu Seon-ui, Joo Kyung-don [kjoo@joongang.co.kr]