“Self-portrait” (1950) by Lee In-sung (1912-50) from a private collection, left, and “On an Autumn Day” (1934), right, a representative work by the artist, from the collection of Leeum, the Samsung Museum of Art. The works are part of a large-scale retrospective of the artist going on at the Deoksu Palace branch of the National Museum of Contemporary Art in central Seoul until Aug. 26. Provided by the museum


Lee In-sung (1912-50) was a critically acclaimed artist in his time, but nowadays he is rarely included on the list of 20th-century greats. Most associate him with one painting, “On an Autumn Day”(1934), which appears in many Korean art history textbooks.

The National Museum of Contemporary Art, or NMOCA hopes to reverse this trend by shedding new light on the artist with a large-scale retrospective titled “The Centennial Celebration of Lee In-sung’s Birth” at its Deoksu Palace branch in central Seoul.

NMOCA reopened the branch last week after three months of renovations to make its interior look similar to the original layout when it was first built in 1938.

The retrospective features 75 pieces including his well-known works like “On an Autumn Day” as well as the paintings and drawings that have rarely been shown to the public since his death. Some 200 historical documents about Lee including early 20th-century photos and news articles are also on display.

Although Lee’s life was relatively short at 38 years, the styles of his paintings are quite diverse.
“It reflects Lee’s experimental mind, ability to conduct such experiments and, at the same time, his struggles to create his own styles and themes as a Korean artist under the influence of various Western art movements,” explained Park Soo-jin, the NMOCA curator who directed the exhibition. 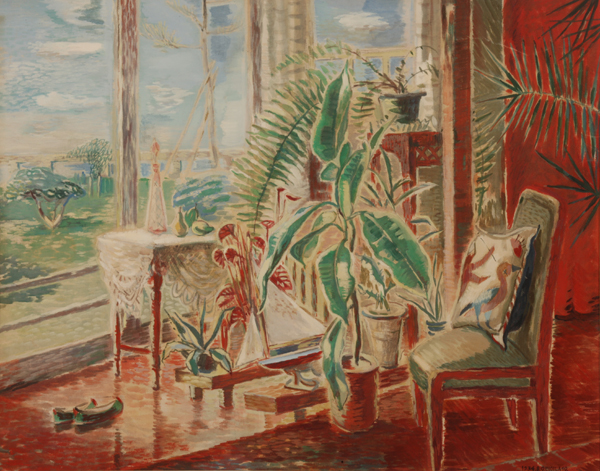 “Room in Summer” (1934) by Lee In-sung shows his fascination with Western interior painting styles while also capturing his unique Korean influences, most notably seen in the pair of traditional shoes in the corner.


A watercolor by Lee, “Room in Summer,” is exemplary of these artistic struggles. It was painted in 1934 during the 1931-35 period when he was coming and going between his hometown, Daegu, and Tokyo for art studies.

The painting depicts a modern Western-style interior filled with light. This and other interior paintings from this period with cheerful colors show Lee’s fascination with Western culture and the influence of French impressionists and the Nabis painters. In particular, “Room in Summer” is reminiscent of interior paintings by Pierre Bonnard with its Mediterranean ambience.

Still, the unique red and green colors show Lee’s characteristic differences from the French painters. A pair of Korean traditional shoes seen in the bottom left corner of the painting further accentuates these distinctions.

“He always tried to create colors unique to Joseon. And the shoes show his efforts and will to certainly include something Korean in his works.”

As to whether these efforts have been generally successful, contemporary art critics are divided, Park said. Lee’s most famous painting “On an Autumn Day” is also among his most controversial.

It is said that Lee intended to represent Korea’s nature in a symbolic way, emphasizing its deep blue autumn sky and red soil. Some critics have high opinion of this approach.

Still, others say that the painting is too reminiscent of Paul Gauguin’s Tahiti idylls and that the color of the woman’s flesh and her half-naked appearance is far from being Korean, according to Park.

These mixed opinions about Lee’s work and his relatively short life have kept him largely unknown to the general public until now. Lee was accidentally shot dead by a police officer after a quarrel on the street, according to the museum.

The 1950 self-portrait among the exhibits was completed just a couple of days before he died, the museum said. Most of his self-portraits depict himself with his eyes closed.