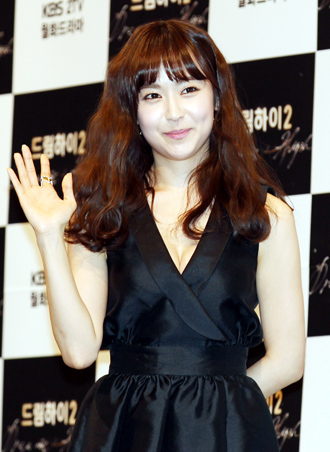 A former member of After School, Yoo So-young, appeared on an episode of “The Chair Korea” yesterday and talked about her aspirations as an actress as well as the pain she suffered when breaking away from the girl group.

On the show, Yoo said that she wanted to be taken as a serious actress and do away with the label of being a girl group singer.

In regards to her future ambitions, Yoo said that she’d love to star in a melodrama with actors Zo In-sung and Song Joong-ki. “I’d like to play a role where the two actors both play my love interests,” said Yoo.

When the host probed Yoo about her time with the girl group, Yoo joked that the group’s leader Kahi gave her a difficult time. “Because she’s the head honcho, there were times when she had to be stern, so I did get a few menacing looks from her when I stepped out of line.”

The 26-year-old said that following her resignation from the band in 2010, the rumors surrounding the scandal caused her distress. “People made it sound like I was ostracized by the group and I was really hurt,” she said. By Carla Sunwoo