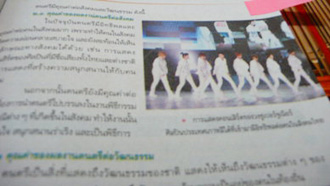 Boy band Super Junior has dominated the academic world by landing a spot inside a Thai textbook.
In the music textbook for high school seniors, the Korean band was mentioned with an accompanying picture as “The artist who performed the biggest concert in Thailand.”

The mention was in reference to the band’s “Super Show 4” concert, which took place in Bangkok from March 16 to 18.
The Thai concert run was extended by one night due to fans’ demands and amassed more than 40,000 audience members in total.

The show was noted for bringing the most number of audience members to a concert. With three concerts in a row, it was also the longest-running consecutive show in Thailand.