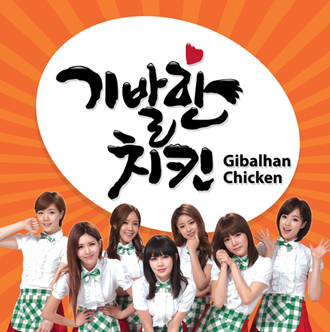 Eun-jung, Qri and Hwa-young of girl group T-ara held an impromptu fan meet at a local store of a fried chicken retailer Gibalhan Chicken, which the group models for.
On May 30, the three members of the girl group visited a store in Cheonho-dong, eastern Seoul, following in the footsteps of other group members So-yeon and Hyo-min who did the same earlier in the year in Busan.

“When So-yeon and Hyo-min visited a local store in Busan for a fan meet, more than 3,000 fans came down to the store. Thus, we thought it might be a good idea to do the same in Seoul,” said a representative from the girl’s agency.

Meanwhile the fried chicken brand said that it chose T-ara to be the face of its brand as “the girls are popular with those in their teens right through to those in their 60s.”
With the face of the girls to its name, the brand said it hoped to expand into the Asian market.
The retailer said that there are plans for different flavors named after girl group members in the near future.