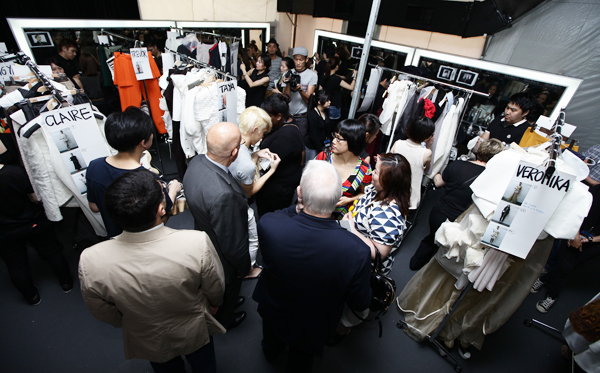 A snapshot backstage before the final presentation for the Audi Star Creation competition. Provided by Asia Fashion Exchange


SINGAPORE - Hundreds of fashion designers and buyers crowded under the sizzling sun in Singapore earlier this month with tickets to the Asia Fashion Exchange 2012, the hottest fashion event in Asia.

Leading designers including Roland Mouret; Nicola Formichetti of French fashion house Mugler; Zac Posen; and Costume National, in addition to emerging brands in Asia like Raoul (Singapore) and DEBB (Korea), showed off their designs at the festival from May 12 to 20.

The Korean footprint at this year’s Asia Fashion Exchange, now in its third year, was bigger than ever. 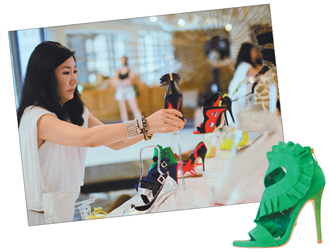 Suecomma Bonnie designer Lee Bo-hyun sets up the display for her line of shoes at the Asia Fashion Exchange.


The Blueprint trade show, for instance, featured 10 Korean brands, up from eight last year, including Suecomma Bonnie, Soulpot Studio and DEBB. And for the Audi Star Creation competition, four of the 12 finalists were from Korea, the strongest showing out of any country.

According to Reinhold Carl, managing director of Audi Singapore, raising productivity in the fashion industry and creating value through design is crucial for Singapore.

“Asia’s fashion industry is a rapidly-growing industry, with its retail sales expected to reach some $10.5 trillion by 2015,” said the director at this year’s event.

“Strategically situated, Singapore has the potential to serve as a leading fashion hub. In recent years, we have witnessed the launch of many international and local fashion brands right here in Singapore.” 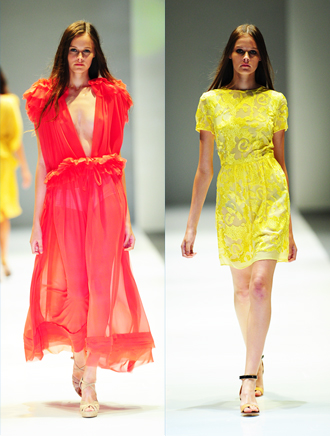 Among the four Korean finalists at the Audi Star Creation, 31-year-old Ko Youngji was selected by the judges as one of the three winners this year for her womenswear collection “Li Jin,” which beat out 255 contestants from 13 countries in Asia. Drawing inspiration from saekdong, or colors used in traditional Korean costume, Ko’s works successfully merged the concept with Western fabrics.

“Although in Korea people don’t tend to pay too much attention to traditional Korean elements in their designs, I’ve sensed that the ‘Koreaness’ in my designs is really favored by foreigners,” said Ko after showcasing her capsule collection during the festival. She received a cash prize of $10,000 from Audi Singapore and a one-year internship with leading fashion retailer FJ Benjamin Singapore.

The young designer, who studied fashion at Esmod Paris, added, “The thing I learned while studying in Paris is that the most ‘Korean’ things have the most potential to become globally recognized.”

At the Blueprint trade show, one of the biggest trade shows in Asia for emerging designers, 10 Korean designers out of a total of 150 brands set up booths and conducted business with more than 250 buyers from international stores in Asia and around the world.

Wonjeong Debbie Yoon, who co-designs for her brand Andy & Debb alongside husband Andy Seokwon Kim (one of the judges for “Project Runway Korea”), showcased her new line of womenswear DEBB for the first time in Asia this year through the Blueprint event.

“I understand Singapore these days is the center of trends and economy among Southern Asian countries,” she said.

“When we were offered to join Blueprint, I was really thrilled to be a part of it.”

Along with the designers represented, the Korean buyer presence at the event has also been growing steadily, with 12 buyers from eight major Korean fashion retailers including Lotte Department Store, Galleria Department store and Korea’s largest boutique shop, Boon The Shop, in attendance.

Galleria Department Store buyer Lee Soo-jin, who came to Blueprint this year and last year, said that Korean customers are hungry for new designer brands from outside the traditional fashion capitals like London, Paris and New York.


“We’ve been selling clothing and accessories by Singaporean brands including Raoul and GG<5 for a couple of years now at Galleria and the labels are doing really well in terms of sales,” Lee said.

“Everybody goes to trade shows in Europe and New York. But as a buyer, you are always looking for items that can differentiate your retailer from all the others, and coming to a trade show in an emerging market like Singapore has worked to my advantage.”

Besides Korean cosmetics brands including Skin Food, Laneige and The Face Shop popping up one after another along Orchard Road, the main shopping district in Singapore, Korean fashion brands have also been edging into popular boutique shops in the country as well.

“K-pop and dramas from Korea are huge among my friends at school here.”

Two of the hottest boutique shops in Singapore, Front Row and Actually, carry clothing and accessories by Korean designers. The owners say that the popularity of K-pop and Korean dramas is now converting into interest in Korean fashion, especially for the younger generation in the region.

When asked how she feels about Korean designers, Front Row’s owner Ann Kositchotitana blurted out, “Korea is hot!”

Near the entrance of her shop stood a male mannequin dressed in a yellow jumper and colorful pants by Korean designer Choi Bum Suk of General Idea, whose clothing also showed at New York Fashion Week in previous years.

“I’m amazed at the progressive nature of Korean designers. I think it has huge potential to become a fashion city,” she said, adding that her buyers have been attending Seoul Fashion Week since last year.

“[Korean designers] are really detail-oriented and they use innovative techniques. For example, with General Idea clothes this season, I love the colors and the woven textiles and fabric blocking.”

Asia, the future of fashion

“I came to Singapore because I believe that the long-term future of fashion is in the East, not the West,” McDowell said.

“I’ve been in fashion for a very long time and I see it slowly winding down [in the West].”

Various industry reports point to the potentially gigantic growth of the Asian fashion market in the near future.

A recent report by consulting firm Bain & Company states that the luxury goods market saw an 11 percent growth last year, despite the global economic gloom, and that Asia’s luxury sector in particular grew 25 percent last year. China’s luxury sector grew 35 percent in 2011, according to the company.

Besides growth, experts in the region say that the tastes of Asian fashion consumers are also shifting rapidly to more youthful and varied designs. Whereas in the past Asian consumers have gained a reputation for preferring big-name luxury brands from the West, now they are perceived as being more open to younger designers and technically innovative fashion.

Arnault Castel, founder of the popular Hong Kong-based retailer Kapok, said that the cliche of the Asian customer, clutching onto their Louis Vuitton bags and being obsessed with luxury logos, is less relevant in 2012.

“Customers in Asia that are 20 to 30 have a rebellious spirit, but they also want to shop. Things are moving fast and in Asia, people move very fast,” he said.

The time when Asian designers played second fiddle to bigger names from the West is slowly coming to an end, according to Formichetti, who is half-Japanese and half-Italian.

“I think you just have to be proud and confident about [being Asian]. In Japan, we tend to use Caucasian models and we think that Europe or America is better,” he said.

“I went through that myself, but now I feel really proud and confident. It’s a great time to be here in Asia. It’s so exciting. I love the fact that people just shop!

“It’s great to see girls [in Asia] wearing dresses .?.?. sometimes you just want to wear something fabulous and I think you see that in Asia, but not so much in Europe.”