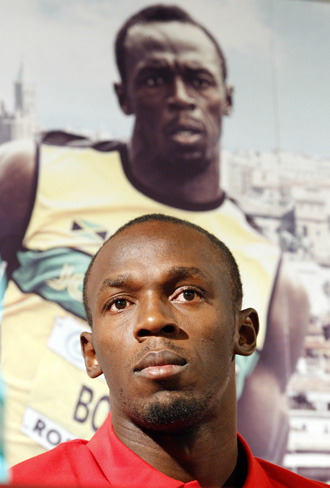 Jamaica sprinter Usain Bolt, world record holder in the 100 meters, looks on during a press conference in Rome, Tuesday, before heading to today’s Golden Gala. [AP/YONHAP]

ROME - Usain Bolt is hoping the track in Rome will help propel him to a fast time and banish memories of his poor showing in Ostrava four days ago.

Running into a slight headwind, the Jamaican superstar recorded his worst time for three years in the Czech Republic.

His time of 10.04 seconds over 100 meters was still good enough to win but the Olympic champion is hoping it was just a one-off.

“I definitely think Rome is a fast track, Asafa [Powell] proved that when I think he ran 9.7 twice on this track,” said Bolt.

“That’s good, I’m looking forward to competing in the lead up to the trials in Jamaica, it’s good to run and compete before the trials. A lot of people predicted I would run 9.7 in Ostrava, I said I wanted to run 9.7 because I ran 9.8 in Kingston [in his previous race].

“For me 9.7 is always a good time to run but I never predict because you never know what will happen on the day, as happened in Ostrava.”

Although it was almost half a second off his world record of 9.58, Bolt insisted it was nothing more than a blip and that he is still on course to defend his Olympic crowns in both the 100 and 200 in London.

“I said every day that you can never have a good race every time you run, for me it was just one of my bad races,” he added.

“I have to put it behind and move on, I’m not worried, there are a lot more races to run and the main races are at the Olympics.”

Despite discussing it with his coach, Glen Mills, Bolt could not pinpoint just why he had run so badly, although he still pipped St. Kitts and St. Nevis veteran Kim Collins and American Darvis Patton into second and third.

“We have talked but for me on that day I explained that my legs were just not feeling that energetic,” said Bolt.

“It was probably a lack of sleep or food, I don’t know, I didn’t feel the energy I normally feel.

“Since then I’ve been trying to get better sleep and eat better. I wasn’t feeling that bad technically over the first 45-50 meters but then we talked about my shoulders coming up a bit but not much.”

While it is still only the very elite speedsters who can dip under 10-seconds for 100, Bolt referred to it as a “slow” time but added that there was no need to worry that such a snail’s pace will be repeated any time soon.

“For me you’re never happy to run 10 sec because it’s a slow time but it happens, you have to move on and focus on the next race and figure out what happened. No one wants bad days but I don’t think it will become a trend. For me it’s not a problem, I never stress over things like this.

“I think I’ve gone through so many things that even if I lose every race before the Olympics it won’t bother me because I have one focus and that’s to go to the Olympics and do great things. I want to be the champion.”