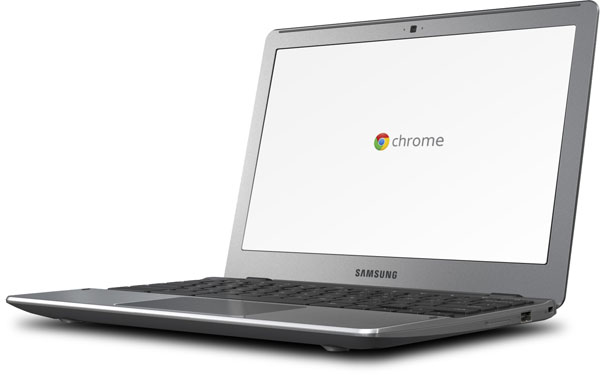 
Google and Samsung Electronics have introduced in the United States the second version of their Chromebook, a new type of a lightweight, simple laptop named after Google’s Chrome Web browser, and a first desktop named Chromebox.

The launch of the new version comes a year after the partnership between the software and hardware giants unveiled the first model. The first Chromebook was made by both Samsung and Taiwan’s Acer, but Samsung is the sole manufacturer this time.

Although Samsung is only the world’s seventh-largest PC producer, it is a strategic partner for Google, given that the Korean behemoth is the largest maker of smartphones running on Google’s Android operating system.

In Korea, the first edition of Chromebook went on sale last August but Samsung Electronics has no plans to sell the second in Korea “due to sluggish demand,” according to a spokesman in Seoul.

Introducing the new laptop on its Web site, Google described it as “a new, faster computer.”

It is “nearly three times faster” than its predecessor, Google says.

What differentiates it from most other laptops is that it has no hard drive.

Instead it comes with 16 gigabytes of flash memory, which are used in smartphones and tablet PCs, and backs up users’ data in the cloud.

Google is trying to raise its footprint in a computer operating system industry still dominated by Microsoft’s Windows.

Windows’ share was 88.6 percent as of April, followed by that of Apple at 5.9 percent, according to market researcher Net Market Share.

“This release is a big step in the journey to bringing [Chromebooks] to the mainstream,” said Sundar Pichai, Google’s senior vice president of Chrome and apps.

The Chromebox is the industry’s first versatile desktop box running on an Intel Core processor that comes with built-in Wi-Fi, six USB ports and two display ports. The box, which is reminiscent of Apple’s Mac Mini in terms of its exterior, costs $329.
By Seo Ji-eun [spring@joongang.co.kr]