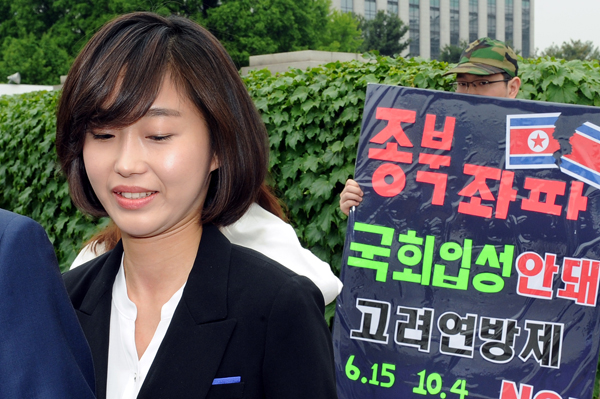 A man pickets the appearance of Kim Jae-yeon, left, a proportional respresentative of the opposition Unified Progressive Party, at a rally for cheaper college tuitions in front of the National Assembly. Kim belongs to her party’s pro-North Gyeonggi Dongbu Alliance, the largest faction in the UPP, and is under pressure to resign her assembly seat over an allegedly rigged primary in March. [NEWS1]


The ruling and main opposition parties are taking legal steps to kick two controversial, pro-North Korea representatives of the opposition Unified Progressive Party out of the National Assembly.

Terms of the representatives of the 19th National Assembly started yesterday including those of Lee Seok-gi and Kim Jae-yeon, who have refused to step down despite a public uproar over an allegedly rigged primary they won in March and their pro-North sympathies.

“We have a way to judge their qualifications as lawmakers,” Park Jie-won, floor leader of the main opposition Democratic United Party, told reporters yesterday. “There are three standards: whether he or she is a legislative lawmaker-elect, whether he or she has another career, and whether he or she possesses the right to run in an election.

“Lee and Kim can be judged on whether they are ‘legislative lawmaker-elects’ because they weren’t elected through a democratic procedure,” Park said. “Still, this proceeding takes so many days. We want them to step down voluntarily.”

It was a surprise that the Democratic United Party would join the ruling Saenuri Party in moving to eject the lawmakers, who are proportional representatives for their party, not having been elected by constituencies. The UPP won seven geographical seats in the April 11 general election and the right to send six proportional representatives. Lee and Kim received high scores in the March primary to pick some of those representatives, although three were appointed directly by the party.

Lee and Kim are thought to have benefitted from the alleged rigging of the primary, which they deny. The third-elected proportional representative, Yoon Geum-soon, is not.

The legal procedure mentioned by the DUP’s Park is in Clause 3 of the National Assembly Act. Under the clause, if more than 30 lawmakers want to expel a fellow lawmaker, an ethics committee inspects the case and puts it to a vote of the entire assembly. If more than two-third of lawmakers who attend the vote agree with it, the lawmaker is expelled.

“If the main opposition Democratic United Party cooperates with us, we will be able to control two-thirds of the parliamentary seats, and then we will take steps [to kick out Lee and Kim],” Lee Hahn-koo, the Saenuri floor leader, said in a radio interview with CBS yesterday.

The ruling party is most troubled about the depth of the pro-North attitude of some newly-elected UPP lawmakers even besides Lee and Kim. Among the 13 UPP lawmakers whose terms began yesterday, six are members of the party’s largest faction, the so-called Gyeonggi Dongbu Alliance, composed of mostly former pro-North student activists from the 1970s and 1980s.

Lee, who is the de facto leader of the faction, has said on a TV talk show, “The problem is not pro-North, but pro-U.S.”

Kim Jae-yeon, a 31-year-old representative popular with the young, has said she “deliberately violated the National Security Law” when she was convicted of leading a campaign protesting the law in 2004.

Lee Sang-kyu, who won a geographic seat in Gwanak B District, southwestern Seoul, recently said in a televised debate that he didn’t want to explain what he thought about North Korea’s dictatorial leadership and human rights abuses because it violated his “freedom of thought.”

Former UPP Co-chair Rhyu Si-min, who is a member of the party’s smaller faction, has said that the pro-North members never sing the national anthem when an official meeting starts, and instead sing a song mourning a student activist who died during the pro-democracy protests.

Conservatives and ruling party members worry that pro-Pyongyang lawmakers could leak military secrets to the North, which is technically at war with the South.

Under current law, all lawmakers are appointed to at least one of the 17 committees of the National Assembly, including the Intelligence Committee, and can have access to classified information. A lawmaker who belongs to the National Defense Committee can read personnel information of key military officials; general information on U.S. forces stationed in the South; military operation plans; profiles of current high-end military hardware and plans to develop new weapons.

Lee Seok-gi’s main secretary, Kim Yeong-wuk, is known as an inner-circle member and strategist of the Gyeonggi Dongbu Alliance. Lee’s security guard, Hong Sun-seok, is former chair of a pro-North university student organization that was convicted of being an anti-government organization by the Supreme Court. Kim Jae-yeon’s general secretary is Kim Bae-gon, who was one of the violent protestors in a melee with non-faction members at a recent UPP’s Central Steering Committee meeting in which one member was seriously injured.

“The newly-elected pro-North lawmakers probably have two intentions: leaking state secrets to Pyongyang and having an impact on some controversial issues such as the Korea-U.S. free trade deal or the Jeju naval base construction,” Koo Hae-woo, chairman of the Korea Institute for Future Strategies and a former pro-North activist, told the Korea JoongAng Daily. “The DUP also has a bunch of former pro-Pyongyang activists who turned away from the regime, but they could possibly cooperate with the UPP’s pro-North members over those controversial domestic political issues.”

But in terms of expulsion, the ruling party and DUP can only set their sights on the UPP’s Lee Seok-gi and Kim Jae-yeon because they are accused of getting their seats through the rigged primary. Four pro-North geographical representatives can’t be touched because they were directly voted in by their constituencies.

A range of non-politicians expressed concern about the pro-North representatives in the assembly.

Korean Citizen, a coalition of 500 conservative civic groups, held a press conference yesterday and said it will form teams to monitor the six “pro-North lawmakers.”

A university students’ group said it would do likewise.

“They didn’t give a clear answer on North Korean affairs, which scares us,” Park Jong-sung, a 21-year-old Yonsei University student and the chairman of the University Students’ Forum of Korea, said. “We will monitor their every single move by forming an alliance with 80 universities nationwide.”

Han Hwa-jeong, a 27-year-old office worker, said “At first, I didn’t believe they were pro-North and thought it could be a political plot by the ruling party. But now, I fear they are North Korean spies.”

Lee Jeong-hui, a 53-year-old factory worker, said “I don’t understand why they don’t sing the national anthem, which every person in the country does. That means they are not people of the Republic of Korea.”

“If we can’t stop their attendance, we should at least monitor them,” Yoo Ho-yeol, a North Korean studies professor at Korea University, told the Korea JoongAng Daily. “Along with the government and the security agencies, voters and civic groups should keep an eye on them.”