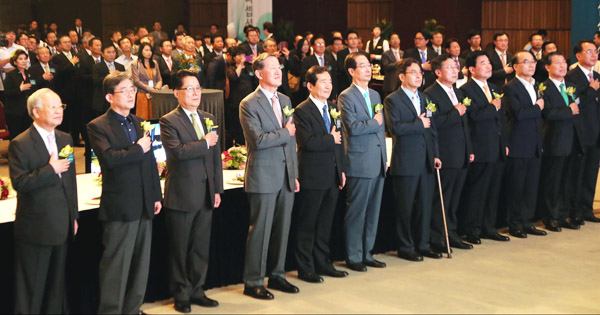 Around 100 lawmakers from both ruling and opposition parties gathered yesterday at the 63 Building on Yeouido, Seoul, to participate in a congratulatory reception hosted by the country’s five largest business organizations, including the Federation of Korean Industries, the Korea Chamber of Commerce & Industry and the Korea International Trade Association. [YONHAP]

Around 100 lawmakers from both ruling and opposition parties gathered at the 63 Building on Yeouido, Seoul, to participate in a congratulatory reception hosted by the country’s five largest business organizations, including the Federation of Korean Industries, the Korea Chamber of Commerce & Industry and the Korea International Trade Association. There have been such events organized for the elected lawmakers of two previous legislatures - the 17th and 18th assemblies - but it is the first time that the two groups met on the very first day of their term.

“We regularly organize the event to help lawmakers-elect understand better the overall business environment as there are new faces every four years,” said Park Cheol-han, an official from the FKI, the largest business lobby group in Korea. “As for the lawmakers in the 19th National Assembly, it is a coincidence that the event fell on the first day of their term.”

“It is true that the presidential election is coming up in December and there are concerns rising over politicians’ excessive cracking down on large companies, but there is no big significance to the event but to socialize with each other,” he said, adding that almost 60 percent of lawmakers of the new parliament are first-term politicians.

Around 70 lawmakers from the Saenuri Party were present at the event that went on for an hour and a half, including Hwang Woo-yea, the party’s new chairman, and Lee Hahn-koo, floor leader, while around 30 from the major opposition Democratic United Party came, including Park Jie-won, the party’s floor leader and senior advisor Chung Sye-kyun.

From the Unified Progressive Party - which is in internal chaos due to the vote-rigging scandal - only one lawmaker-elect, Kang Dong-won representing Sunchang, North Jeolla, was present.

While businesspeople understood yesterday’s reception as a social event, politicians had a slightly different view. They considered the event as opportunity for business lobby groups to express their worries over various economic policies that will be introduced by the ruling and opposition parties ahead of the presidential elections this year.

“There is somewhat a consensus among us that we should push to create economic democratization and a fair, competitive society,” said Lee, floor leader of the Saenuri Party. “The business circle, however, will have its own requests amidst the uncertain global economy.” Lee is referred to as the economic tutor of the ruling party’s long-time presidential hopeful Park Geun-hye.