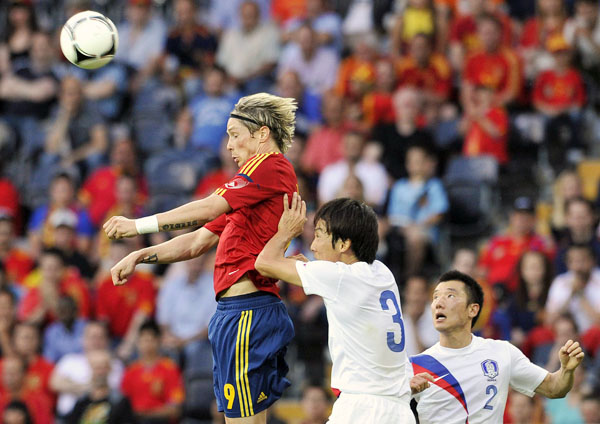 
Korea experienced the quality of the world’s No. 1 football team from the start of its international friendly versus Spain on Wednesday, with striker Fernando Torres finding the back of the net just 11 minutes into the first half.

The Taegeuk Warriors would go on to lose 4-1 at the Stade de Suisse in Bern, Switzerland, a humbling loss ahead of two crucial qualifiers for the 2014 FIFA World Cup this month.

Chelsea FC striker Torres ended his year-long scoring drought for his country when he got behind the Korean defense and finished Beñat Etxebarria’s cross with the back of his head to put the Spaniards ahead.

Korea fought back with an equalizer from Kim Do-heon just before halftime, but collapsed in the last 45 as Xabi Alonso, Santiago Cazorla and Álvaro Negredo added three more to seal the victory.

“We lost the match, but our players put their best effort forward,” said national team manager Choi Kang-hee after the game. “The match against Spain made us to feel the difference in the level of football.”

Korea, No. 31 in the FIFA rankings, now has two draws and three losses versus Spain. The Taegeuk Warriors edged the football powerhouse 10 years ago in the 2002 FIFA World Cup quarterfinals to reach the semis — becoming the first Asian nation to do so — but since that game ended in a penalty shootout, the official record
is written as a draw.

The friendly on Wednesday served as a warm-up for both teams before critical campaigns this summer.

Korea will meet Qatar on June 9 before hosting Lebanon on June 12 in the final round of World Cup qualifiers. The team will train in Switzerland until Sunday before departing for Qatar on Monday.

For Spain, the friendly was a tuneup for the 2012 European Football Championship. The defending champions of the EURO will have another friendly against China on Sunday before heading to Gdansk, Poland, to start their European campaign against Italy on June 10, followed by Ireland and Croatia in Group C.

Since K-League-based players joined the national team late due to their league schedules, Choi started overseas-based players and then put K-Leaguers on the pitch as second-half substitutes.

Among the 11 starters, eight compete in overseas leagues while two players — Yeom Ki-hun and Kim Doheon — were playing for the amateur side National Police Agency while fulfilling their military service.

Right back Choi Hyo-jin, who plays for military team Sangju Sangmu Phoenix, was the only K-Leaguer on the field from the beginning.

Del Bosque already announced his 23-man squad for the EURO, but on Wednesday, six players who were cut from the final squad featured with Etxebarria and Ignacio Monreal starting the match.

Goalkeeper Kim Jin-hyeon, who had his international debut match, was busy blocking shots, while center back duo Lee Jung-soo and Cho Yonghyung had a difficult time marking Torres and his supporting cast, Cazorla, David Silva and Juan Mata.

Korea had its first shot on target in the 20th when Hamburg SV striker Son Heung-min made a cheeky effort with his left foot. In the 43rd, former West Bromwich Albion player Kim Do-heon fired a laser from 25 meters to beat Spanish goalkeeper Pepe Reina and leveled the score 1-1 to enter second half.

Spain regained control from the beginning of the second half as Xabi Alonso converted a penalty in the 52nd after Monreal’s shot was stopped by Cho’s hand inside the penalty box. Just four minutes later, Cazorla added another goal with a low free kick that went underneath the wall and passed goalkeeper Kim on his right side.

With Korea replacing five and Spain substituting six players after the 3-1 score, the 2010 World Cup champions landed the final punch when Negredo slotted the ball between goalkeeper Kim’s legs in the 82nd.