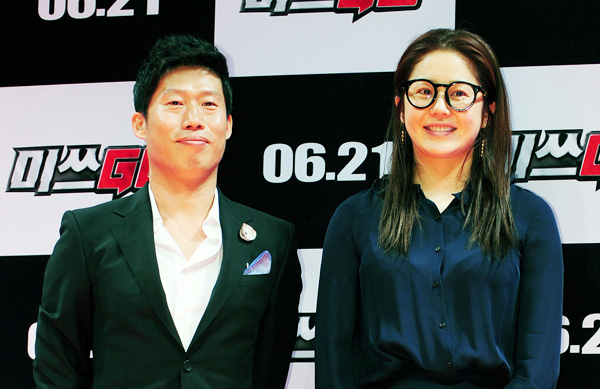 Yoo Hae-jin, left, and Ko Hyun-jung pose for reporters during a press conference for their new film “Miss Conspirator” on Wednesday.[NEWSIS]


She has played Korea’s first female president and a royal concubine. In her newest role, actress Ko Hyun-jung returns to the big screen as a nerdy, reclusive cartoonist with a serious social phobia in the new action comedy film “Miss Conspirator.”

“I agreed to the role because I found it interesting that Chun Su-ro [Ko’s character in the film] has a phobia and for me, to have such a phobia would make what I do impossible,” said Ko during a press conference to promote the film in Seoul Wednesday.

“Chun Su-ro in the end, is a lovable character,” she said. “I doubted at first whether I could play this sort of lovable role well but I did my best.”

In the film Chun Su-ro acquires a severe case of sociophobia - a fear of interacting with other people - after the death of her parents, and then somehow gets mixed up in a drug deal involving one of the biggest organized crime groups in Korea.

When a drug lord talks her into delivering a birthday cake secretly filled with drugs to one of his colleagues, Su-ro unknowingly agrees and gets tracked down by an undercover cop. As she runs from the police, Su-ro is forced to deal with her phobia and interact with others.

Ko’s love interest in the film is played by Yoo Hae-jin, who admitted that he was star struck at first by the actress. 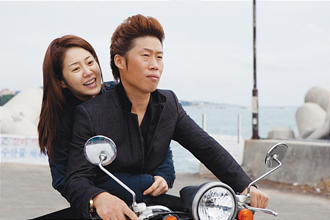 A still image from the film Provided by 1st Look

“Ever since I was young, I have this image of Ko Hyun-jung as a big star, but thankfully she made shooting very comfortable with her attitude and I was able to do my role,” said Yoo at the conference.

Besides Ko and Yoo, the film has other big names from Korean films including veteran comic actor Sung Dong-il as well as Ko Chang-suk and Lee Moon-sik.

“It is an honor for me to be working with these established actors,” said director Park Cheol-kwan, who debuted with the 2001 action comedy film “Let’s Play Dharma.” “All directors I know want to have a chance to work with Ko Hyun-jung, Yoo Hae-jin, Sung Dong-il, Lee Moon-sik and Ko Chang-suk,”

After her comeback to film and television in 2006 following a divorce from Chung Yong-jin, Shinsegae vice chairman and CEO, Ko has been featured in weighty roles in art-house films including director Hong Sang-soo’s 2006 “Woman on the Beach” and director Lee Jae-young’s 2009 “Actresses.”

“Actually, this is the first time I’ve starred in a film that has a script,” said Ko. Hong Sang-soo is known to work without a script, giving a few lines of dialogue to actors on the day of filming, while “Actresses” was a mockumentary with a lot of ad-libing by the actors.

Meanwhile, the actress alluded to her comic side during the conference, making self-deprecating jokes.

“A lot of people think that I am picky about selecting my work but I’m not really,” she said, laughing.

“They also think I get a lot of movie offers but actually, I don’t get many .?.?. I like the fact that this film has an ending that is not so serious, something that is funny and fresh.”