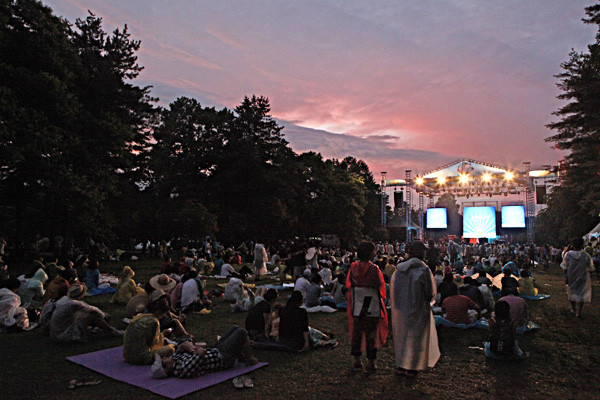 
Namiseom, or Nami Island, in Chuncheon, Gangwon, which became well known through the 2002 TV drama “Winter Sonata,” is a privately owned island that can be reached only by a five-minute ferry ride.

Visitors are allowed on the island from 8 a.m. to 9 p.m., the only exception being guests at the Naminara, the sole hotel on the island.

But once a year there is another option for staying overnight on Namiseom: the Rainbow Island Music & Camping Festival. After the first-year success of the festival, the island’s owners decided to allow camping during the June 9 and June 10 event this year.

Last year’s festival was a hit, quickly joining the list of Korea’s must-go-to music festivals. All 3,000 discounted two-day tickets were gone in 20 minutes after they went on sale on April 10.

That kind of enthusiasm was instrumental in attracting American singer-songwriter Jason Mraz, who will perform on the first day of this year’s Rainbow Island festival. Organizers said he decided to participate after hearing about the festival on “beautiful Nami Island” from KT Tunstall, one of last year’s headliners, organizers said.

Mraz has told organizers he will donate the proceeds from 20 special Rainbow Island festival tickets to his Jason Mraz Foundation, which supports organizations that promote equality, art, education and environmental preservation.

As a prelude to the festival, Mraz will kick off his world tour with a concert June 8 in Busan.

The second day will feature Christina Perri, another American singer-songwriter, who made a name for herself with her debut single “Jar of Hearts.”

The song was featured on Fox television’s “So You Think You Can Dance” audition show in 2010.

Perri also is widely known to her Korean fans for her guitar-driven love song “A Thousand Years” that was on the soundtrack of “The Twilight Saga: Breaking Dawn ? Part 1.”

Perri’s festival performance, her first appearance in Korea, will feature songs from her upcoming second album, according to organizers.

Local artists scheduled to appear at the festival include Busker Busker, runner-up of the singing audition show “Superstar K3,” 1990s duo 015B and Lee Seung-hwan, who has released 10 albums during his 23-year singing career.

All in all, 36 groups or artists will perform over the two days of the festival in several locations on Nami Island.

Holders of two-day tickets who plan to camp on the island are required to rent their equipment. The two available options are a tent for two persons at 55,000 won ($46.50) or three to five persons at 77,000 won, which include sleeping bags and a lantern.