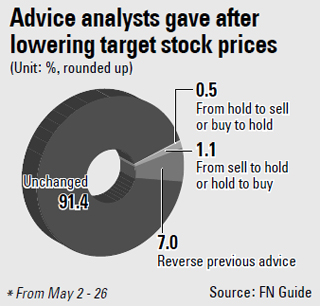 Many investors rely on analysts’ reports from brokerages ahead of placing their bets on stocks, but what happens when the advice they get conflicts with broader outlooks on an industry or company?

The report cast a cloud over the company’s profitability and forecast a weaker performance for the second quarter, with the analyst lowering the target price for its shares 21 percent to 24,000 won. Target stock prices look six to 12 months ahead based on the company or industry’s projected performance.

However, instead of advising investors to sell their holdings, he stirred confusion by encouraging them to buy more. Such mixed messages were hammered home the next day when Dongbu Securities and Mirae Asset Securities put out similar reports advocating the acquisition of more shares in the company, despite its apparently bleak prospects.

In Korea, such cases are anything but isolated. Analysts seem reluctant to instruct clients or readers to sell, but are only too willing to recommend they hold or buy.

FN Guide, which provides stock market information, indicated in a recent report that local analysts have a tendency to stick to their guns on stocks they have previously recommended even in cases where they lower the stock’s target value.

In the first 25 days of this month, 91.4 percent of 2,581 analysts’ reports kept to their previous advice despite lowering the target value due in most cases to the anticipated impact of instability provoked from the euro zone’s fiscal crisis.

Only 0.5 percent changed from hold to sell or from buy to hold.

However, brokerages have their own in-house regulations and these are believed to be one of the primary reasons why analysts are loathe to advocate selling up.

In most cases, analysts are told to advise investors to sell only when a stock’s value falls up to 15 percent below a certain target.

Furthermore, critics claim that analysts often release reports showing a positive bias as many of their top clients are large companies and institutional investors who they do not wish to alienate.

“When an analyst lowers a target price but still advises investors to buy, it could show they have lost confidence,” said Lee Jong-woo, head of research at Solomon Investment and Securities.