In grip of global slowdown, steelmakers shave some fat

In grip of global slowdown, steelmakers shave some fat 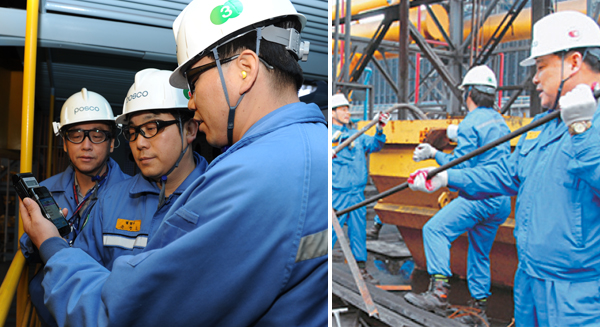 Left: Posco officials check energy consumption at a production line. Right: They collect scrap steel for recycling at a site near the company’s Pohang Steel Works in the eastern coastal city in North Gyeongsang. Provided by the company


Hit by declining profits, Dongkuk Steel, the No. 3 player in Korea’s steelmaking industry, had to shut down its main thick-plate production line in Pohang, North Gyeongsang, earlier this month.

“The decision was inevitable because the cost of running the old plant exceeded its earnings,” said an industry insider on the condition of anonymity.

He said local market prices of thick plates have been declining sharply since late last year, while import prices of iron ore and other raw materials have surged.

“Posco has been suffering from deteriorating margins since the first quarter of this year due to pressure from local shipbuilders to lower supply prices of thick plates,” said Han Mi-hyang, a communications director at Posco.

Han declined to reveal how much it has cost the company to produce thick plates in consideration of an ongoing tug-of-war between the local steelmaking and shipbuilding industries over prices.

Amid the decelerating profitability of the product, a major cash cow, Posco decided to tighten its belt by setting a goal of slashing 2 trillion won ($1.7 billion) in production costs this year.

The nation’s No. 1 steelmaker has had some measure of success in lowering costs in recent years through a number of campaigns and programs. This has seen it ease its production outlays to the tune of over 1 trillion won a year since 2009.

In March, its thick-plate unit introduced a company-wide campaign dubbed Green Patrol to boost awareness of cost-efficient ways of saving energy. Employees at the company’s Pohang Steel Works regularly patrol the production lines there in search of places where power is being wasted.

The local market for thick plates has been reeling from a supply glut since last year as production has risen in tandem with falling demand from the shipbuilding industry. Compounding this, more than 4 million tons of foreign-made thick plates are being imported to the country each year, compelling local players to drop their prices to stay competitive.

According to the industry, the per-ton market price of thick plates plunged more than 30 percent from 1.1 million won early last year to less than 800,000 won this month.

Seeing the recent influx of lower-priced thick plates from China and Japan as one of the root causes, the Korea Iron & Steel Association said on May 20 that it will file anti-dumping lawsuits against Chinese and Japanese steelmakers.

Korea’s Northeast Asian rivals have also benefited from the prolonged recession in the shipbuilding industry that has seen global demand for thick plates wane, while orders for cheaper product from China and Japan have risen. The association said that the two countries now feed just over one-third, or 35 percent, of the total market.

In a bid to maintain its profit margins, Korea’s No. 2 player Hyundai Steel said it plans to save 450 billion won this year by securing cheaper raw materials. The company said it managed to cut production costs by 100 billion won in the first quarter.

Hyundai also plans to build a production line for sheets of H-steel more than 40 millimeters (1.57 inches) thick. In terms of its fuel usage, the company is on track to replace its bunker-C oil with cheaper liquid natural gas.

Dongkuk has come up with 100 ways of dealing with its looming financial challenges, including closing its Pohang plant. The company aims to further streamline its remaining production lines with an accent on highly profitable products and ramp up the efficiency of its newer facilities.