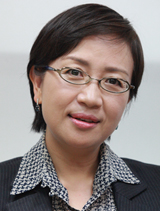 A KT executive has become the first Asian to take the No. 2 position at a mobile providers industry group that had been dominated by Americans and Europeans.

She will represent mobile operators of the world, help them develop their markets and help in negotiations with governments to resolve difficulties mobile operators may face with local regulations.

Yang will quit her position at KT and will start working at GSMA’s headquarter in London June 15.

“I feel a lot of responsibility as I am about to play a serious role at the center of the global mobile industry,” said Yang in a press release by KT. “I will do my best to establish a new paradigm for the communication industry and will research the common issues each and every mobile operators have.”

“I realized there were just so many things a mathematician can do in business,” Yang said.

She started working on a marketing team at American Express in the United States in 2001 and worked there seven years. She came back to Korea to become Chief Marketing Officer at Shinhan Bank. In 2009, she moved to KT. At KT she worked on mobile transaction projects.

“Finance and communication are similar as both follow the whereabouts of customers,” said Yang.

She first met executives of GSMA in 2009 at a Mobile Asia Congress organized by GSMA.

“At the first international event I attended, I realized that many of the overseas mobile industry experts underestimate Korean mobile operators,” said Yang.

Starting from the Mobile World Congress in the following year, she showed global experts KT’s accomplishment in the local market and its future plans.

Director General Anne Bouverot of GSMA said that she showed a real passion for her work.