City gov’t to regulate smokers as of March 2013

City gov’t to regulate smokers as of March 2013 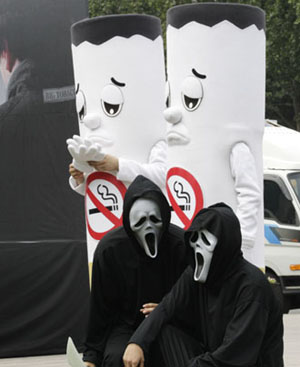 Activists dressed as cigarettes and ghosts take a rest before kicking off a campaign marking the World No Tobacco Day in Seoul, yesterday. [AP/YONHAP]

Smokers will soon only be allowed to smoke in designated smoking zones in restaurants.

The Seoul Metropolitan Government said on Wednesday that the city government will have the ability to regulate smoking as of March 2013.

After that, people found smoking inside of restaurants will receive a 100,000 won ($85.3) in fines and larger restaurants who don’t provide a separate smoking zone inside their facility will be fined 3 million won.

The city government said they have decided to tighten enforcement on smoking in public places, in particular restaurants, as the power to regulate smoking will be transferred from police to the local government in the first half of next year. 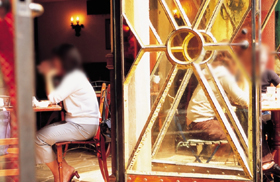 The current law stipulates that only restaurants bigger than 150 square meters (1,614 square feet) must designate half of the area as a non-smoking zone, but the Ministry of Health and Welfare decided to expand the policy to all restaurants from 2016.

The city government said that smoking inside public places such as restaurants was subject to punishment by law as far back as 1995, but police weren’t able to effectively police smoking due to a lack of manpower.

The city government said they will enforce violations by cooperating with 25 local district offices in Seoul and they are currently considering increasing the number of staff to help regulate the businesses.

The city government will provide detailed rules for the smoking ban by the end of the year.

“The city government has decided to stamp out smoking inside public places to promote a healthier environment and reduce the secondhand smoke hazard for citizens,” said Kim Kyung-ho, the director of welfare and health division of the Seoul Metropolitan Government.