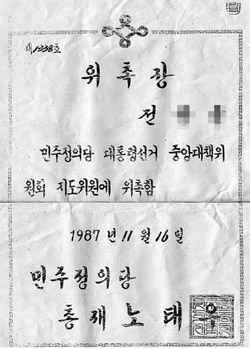 A man who offered to help families of Korean guerilla fighters against Japanese colonial rule in North Korea get work visas in the South has been accused of defrauding them of hundreds of millions of won.

Park Kwon-cheol, chairman of a research institute in China that studies freedom fighters during the colonial period, submitted a petition to the Seoul Metropolitan Police Agency on May 18 that requested an investigation of an 86-year-old unemployed man surnamed Jeon.

In the petition, Park said Jeon has taken hundreds millions of won from ethnic Korean descendants of independence fighters living in China in return for help in getting them H-2 working visas in 2007. Once they paid him money, Park claimed, the Koreans never heard from Jeon again.

The JoongAng Ilbo tried to contact Jeon in Korea but his phone was turned off.

According to Park, who is a Chinese citizen of ethnic Korean descent living in Longjing, China, Jeon told the families of former freedom fighters that he was chairman of a government agency established to help ethnic Koreans living in China. He said the Korean government had a program to give work visas to descendants of anti-Japanese activists from the colonial period.

Park said Jeon showed him an appointment certificate signed by former President Roh Tae-woo, and said the agency was established during the Roh administration (1988-1993) and the visa project was its first concrete action.

Jeon held a presentation about the program in January 2007 in Longjing, and about 2,000 descendants of freedom fighters applied for the visas. Jeon was paid a total of 300 million won ($254,100) to 400 million won, Park claimed.

Park Chang-wook, a well-known professor at Yanbian University, was also fooled by Jeon and helped him meet applicants.

Jeon’s agency was apparently a fake. His certificate signed by Roh can’t be verified because many similar certificates were issued at the time.

None of the applicants received visas, which they may have actually been eligible for, because they didn’t have the necessary documents to prove they were descendants of independence activists. They requested help from the Ministry of Justice in vain. In 2011, Park Chang-wook died in anguish over their plight and their being defrauded by Jeon.

Park said many of the applicants leased out their homes and quit jobs thinking they were moving to the South. About 160 descendants are now sleeping on the streets, he said.

Politicians including Lee Jae-oh, Kim Choong-hwan, and Chin Soo-hee, of the ruling Saenuri Party requested government help for the cheated applicants, but ministries and the central government didn’t want to get involved.

“I’m currently bankrupt because I spent most of my assets helping the descendants,” Park Kwon-cheol told the JoongAng Ilbo.

“We trusted Jeon because we thought his office was being managed by the Korean government. In China, a certificate signed by the leader of the country has very strong power and we thought it would work in the same way in Korea.”

“We need to provide a policy that can help descendants of our independence activists,” said Kim Young-hye, head of the standing committee of the National Human Rights Commission.