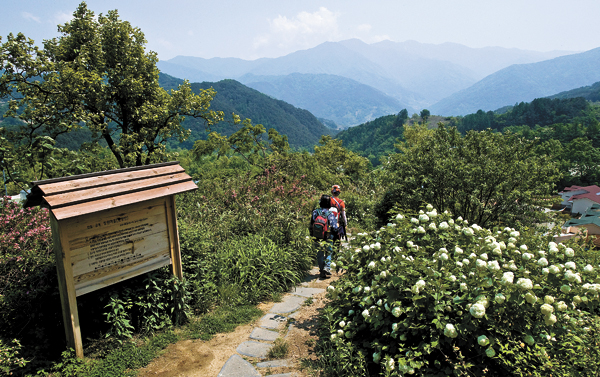 
Mount Jiri National Park, in the southern part of the Korean Peninsula, is considered the oldest national park in the country and still stands as the biggest in area.

And it is still making news.

Late last month, the final section of the Mount Jiri’s Dullegil, a hiking trail circling the mountain, was completed and opened to the public.

It has been five years since Soopgil, a private company, started work on redeveloping the trail and four years since the first section, from Namwon’s Sannae to Hamyang’s Hyucheon, opened to the public.

The Mount Jiri Dullegil includes 20 trails and a total of 274 kilometers (170 miles), through 117 villages in the North and South Jeolla and South Gyeongsang. About 44 percent of the paths are forest roads, while the rest are farm and village roads for pedestrians.

The Mount Jiri Dullegil is one of the best examples of successful cooperation between private and public entities. The government spent 6.9 billion won ($5.9 million) for the redevelopment while construction and rebuilding was left to the private sector. 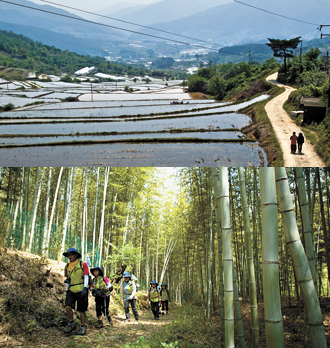 The farm fields of the village of Sanghwang in Sannae-myeon, Namwon, top, and a bamboo forest on the Mount Jiri Dullegil hiking trail, bottom.

The Jeju Olle Trail on Jeju Island, Korea’s most well-known hiking destination located on Korea’s southern most island, trails are numbered. The Mount Jiri Dullegil names its trails the after the villages they traverse, respecting that the original purpose of the Dulle trail was to connect neighboring villages.

The road from Jucheon, in North Jeolla, to Sancheong County via Hamyang in South Gyeongsang, is about 70 kilometers. It was the first of the Dullegil to be opened.

The section from Jucheon to Unbong and Inwol is mostly flat. After a short forest path in Jucheon, the rest of the trail is on farmland. The road from Inwol to Geumgye, which goes through the villages of Maedong in Namwon and Changwon in Hamyang, was the first dullegil to be built. It opened to the public as a test trail in 2007.

Deunggujae, a hill in between the villages of Sanghwang and Changwon, serves as the boundary between North Jeolla and South Gyeongsang. Passersby may see residents gathering in wetland pastures filled with small tuna fish crossed by lovely paths. 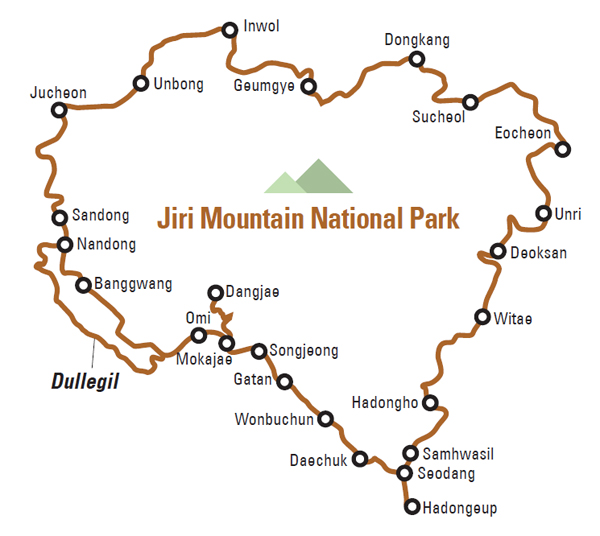 After passing through Changwon, hikers come to the trail connecting Geumgye and Donggang, where there is an area called Yongyudam that is famous for its scenery. Set amid trees and flowers, Yongyudam was frequented by nobility who frequently traveled to Mount Jiri during the Joseon Dynasty (1392-1910). Farther on is the village of Jeumchon, which is located on the Donggang River to Sucheol trail. At this time of year, the path is lined with peonies in full bloom. The village also includes a memorial park for the Sancheong and Hamyang massacre during the Korean War (1950-53).

Most trails in the southeast area of Mount Jiri were opened last year. Because they are hilly, they tend to be less crowded than others on the mountain. The Sucheol to Eocheon trail runs along the Gyeongho River. In the village of Punghyeon, there is Sungsimwon, a treatment facility for leprosy run by a Franciscan monastery. Hikers can stay at the guesthouse, as well as attend religious services. “Patients at Sungsimwon will be really glad to see Mount Jiri Dullegil hikers come visit them and walk around the facility,” said Kwak Gyeong-hee, a social worker at Sungsimwon.

The Eocheon to Unri section might be the most difficult of the Mount Jiri Dullegil hiking trail. At an altitude of 800 meters, the trail ends at Unri Village.

Before reaching Hadong, there is an information desk in the village of Jungtae, where hikers must sign a sheet promising not to disturb crops or other private agricultural property.

Yangituhjae peak, which separates the Nakdong and Seumjin rivers, is on the Witae to Hadongho trail. Water that flows north is part of the Nakdong, while south-flowing water is part of Seumjin river. One of the highlights of this part of the Dullegil hiking trail is a large bamboo forest near the peak that contains a variety of trees, including elm, oak and pine.

After the Hadongho to Samhwasil trail comes the village of Daechuk, the site of Munamsong, a pine tree that has been designated a natural monument of Korea. The tree pierced a 1,000-year-old rock and has grown to a height of nearly 13 meters. Every July 15 on the lunar calendar, Daechuk residents have a festival to honor the tree and village. 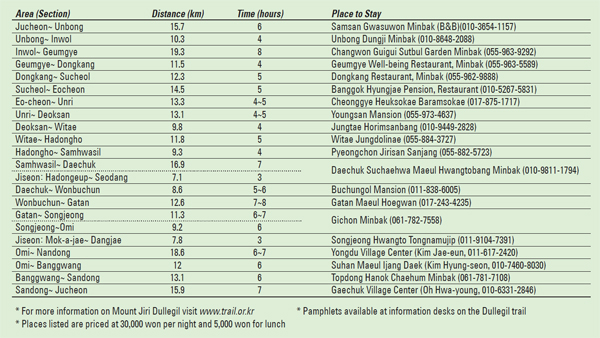 The 65-kilometer section from Daechuk to Omi is a newer part of the Dullegil that opened this year.

It leads hikers to many attractions, including Hwagye Market and Ssanggye Temple. After walking the Daechuk to Omi trail, visitors reach Daechuk Village on the banks of Akyang Stream. Roads go through small farm fields with colors from light green to deep brown.

The village also is the site of Dongjeong Lake and Bubusong, another pine tree that has been designated a national natural monument.

The trail from Daechuk to Wonbuchun is alive with old tales and myths. There is the Musum Stone, which legend has it is the site where a musum, or male servant, killed himself in agony over his impossible, unrequited love for the female head of the household. Then there is the Doksaemi, a spring that supposedly did not dry during the longest drought in ancient times.

An added bonus this time of year is the colorful persimmon, chestnut and Japanese apricot trees lining the road.

The Wonbuchun to Gatan section is a great way to enjoy the scenery of tea fields, notably the Jeunggeum field. It can be especially beautiful in the early morning, when mountain mist frequently blankets the land.

The trailside from Gatan to Songjeong is burgeoning with cherry blossoms. To get to the Mount Jiri Dullegil from Hwagye Market, catch the bus in front of Hwagye Middle School.

After Songjeong, the trail leads to Omi Village, where visitors can choose one of two paths: the Omi to Banggwang trail leads to Hwaeum and Chuneun temples, or the Omi to Nandong trail, which leads to the Seumjin River.

The two trails however, eventually reemerge at the village of Nandong. From there, the road leads to the mountainous paths tracks of Mount Jiri.

Walking past the Sandong-myeon part of the trail, famous for its Japanese cherry festival, hikers reach Bamjae and, finally, the village of Jucheon.