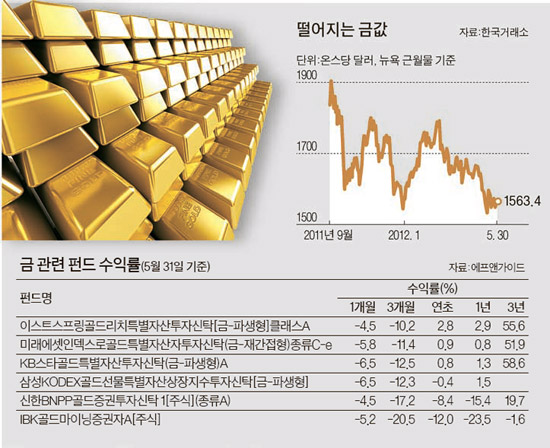 However, gold is no longer considered such an attractive investment and traders worldwide are ditching it for alternatives such as the U.S. and German treasuries and U.S. dollars.

The rising demand for U.S. dollars as it appreciated against other currencies turned investors off gold.

Joe Foster, portfolio manger of Van Eck Global’s International Investors Gold Fund, was quoted by the Wall Street Journal as saying, “It’s been behaving more like a risk asset than a safe haven.”

In just eight months, its value plummeted 20 percent. It fell more than 6 percent in April and dropped another 7 percent last month as the worsening situation in the euro zone once again threatens global markets.

As a result, gold-linked funds are seeing their profit rates plummet.

As of the end of last month, the profit rate on a KB gold fund stood at minus 12.5 percent, widening from minus 0.4 percent at the start of the year.

But while gold is losing its luster, demand is still growing for dollars.

The U.S. Federal Reserve has printed more than $2.3 trillion since 2008 in two major cases of quantitative easing to satisfy the market.

The strengthening dollar has made gold less attractive by effectively making it more expensive.

Investors have been turning to other safe havens including the U.S. and German government bonds. The yield on the U.S. government debt with a 10-year maturity fell recently to 1.62 percent.