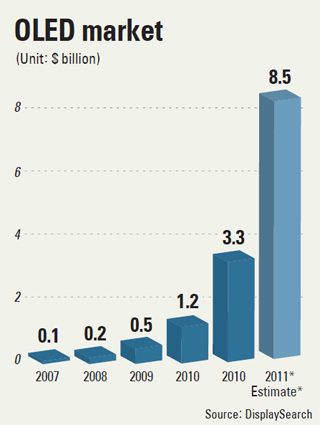 On the afternoon of March 20, a helicopter carrying Dow Chemical Chair Andrew Liveris landed on the rooftop heliport of Samsung Electronics’ headquarters in Seocho-dong, southern Seoul, at the invitation of COO Jay Y. Lee, the only son of Samsung founder Lee Kun-hee.

“The two executives dined at a company restaurant that caters to VIPs and discussed ways of boosting cooperation,” said a Samsung official.

Officials with knowledge of the talks were fuzzy on the details but said they mostly covered Samsung’s smartphones and organic light-emitting diode (OLED) TVs.

Dow Chemical has been focusing on developing OLED materials recently, while Samsung’s Galaxy handsets - the company is now releasing its third in the series - use active-matrix OLED (Amoled) panels.

OLED screens are being tipped as the next-generation alternative to liquid crystal displays (LCDs) as they offer brighter and clearer images.

“Dow Chemical is diversifying away from its chemical-centric way of operating,” said an official at the company. “And materials for electronic goods are part of our core business.”

It raises 2 trillion won ($1.7 billion) a year in sales from this business segment alone, some 800 billion won of which derives from the Korean market.

Market observers said the U.S-based chemical giant has a competitive edge in Red, Green and Blue (RGB) materials that lengthen the life span of OLED materials and help them consume less electricity.

The firm in March opened its Dow Seoul Technology Center in Hwaseong, Gyeonggi, a global R&D center where 300 researchers focus on technological advances in display technologies and materials for electronics.

Executive VP Jerome A. Peribere described Korea as a global leader in the electronics market and vowed to continue investing in local companies to cement ties.

German chemical maker BASF is also mulling expanding into the realm of materials for electronics. Its Korean operation recently announced plans to ramp up its investment in high value-added products ranging from chips to displays.

“We’ve just started talks with one of Korea’s two major electronics companies about ways we can walk together,” said Shin Woo-sung, head of BASF Korea. “We will go beyond home electronic appliances and expand our business portfolio into high value-added businesses.”

Cheil Industries has been also been aggressively rearranging its portfolio. It started as a fashion house but expanded into chemicals and electronics.