There’s only one pitch for Dongwon’s Park

There’s only one pitch for Dongwon’s Park 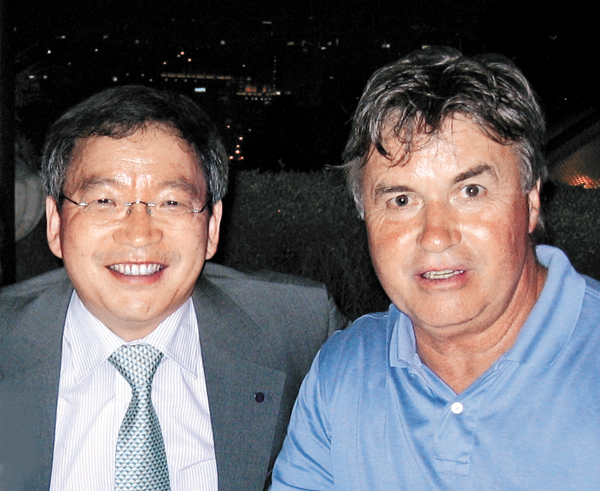 
When the alarm goes off at 5:45 a.m., Park In-gu jumps out of bed and heads straight to Yangjae Geunrin Park in southern Seoul for a 15-minute warm up and 90-minute football match.

After a quick shower, the 66-year-old arrives at Dongwon Group headquarters for another jam-packed day as vice chairman.

Park has been following this daily routine for the last 10 years, showing that age is nothing more than a number. His aides say he is such good shape that he outruns 20- and 30-year-olds on the pitch.

The vice-chair said he’s madly in love with football. When he flew to the United States for a business trip in April, he played football overseas. Whenever he has to meet clients on the golf course, he practices his swing after finishing a football match in the morning.

And once a year, Park has the opportunity to show off his skills in front of the entire company at the Dongwon Group annual football match.

Some of his aides still try to stop him from playing football because of his age, but Park insists on galloping on the pitch.

“A 70-year-old man is also on our football team,” Park said. “I want to continue to play football even if I get older and pass the 70 mark as long as my health is okay.”

Six years ago, Park broke his finger while playing football with his employees. More recently, he injured a ligament in his left knee, but he still returned to the pitch after resting for just 15 days.

When asked for tips on how to avoid injuries, Park said less dribbling and quick passes to colleagues should do the trick.

“One-touch passing allows you get in less confrontations with competing team members,” Park said. “When it comes to football, passing is the fundamental of the game.

“Football is a game that encompasses unpredictability, speed and team play,” Park said.

“A single pass decides a team’s victory or defeat. It’s also fun because it’s not predictable. Sometimes a strong team loses to a weak team.”

Park has applied his football tactics to his management of Dongwon Group. He tells his employees to do their best, quickly respond to consumers’ whims and move forward together as a team.

Park said he is a huge fan of Dutch football player Hendrik Johannes Cruijff and Celtic midfielder Ki Sung-yueng and hopes to inspire young Koreans to pursue the sport.

When he was CEO of Dongwon F&B in 2001, he established the Dongwon Cup, which has been sponsoring the national youth football league for over 10 years.

“It was worth the effort,” Park said. “A world-class football player is born when he starts to kick the ball around when he’s little. Ki Sung-yueng, Ji Dong-won and Koo Ja-cheol played in the youth football league.”
Park is also friendly with Guus Hiddink, the former football manager of the Korean national team who was at the helm during their 2002 semifinal FIFA World Cup run.

“There is no other sport in the world like football,” Park said.