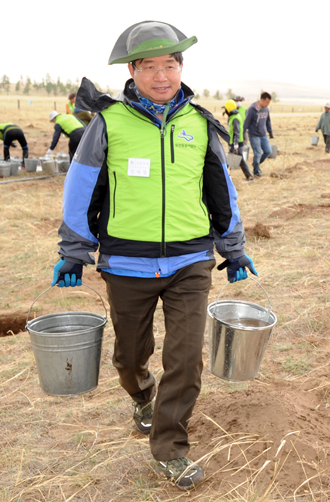 Mayor Yeom Tae-young of Suwon, Gyeonggi, carries buckets of water to pour over newly planted trees in the Edensom Desert of Mongolia. The effort is part of the city’s environmental project to prevent desertification and climate change. By Chung Young-jin

SUWON, Gyeonggi - A strong sandstorm of 25 to 35 meters (114 feet) high blows for two hours across the Edensom Desert 50 meters east of Ulan bator, the bustling capital of Mongolia. But it does not deter a group of Korean and Mongolian volunteers from digging.

Mayor Yeom Tae-young of Suwon, Gyeonggi, is one of hundred shovelers digging a 60-centimeter-deep hole before planting the a young tree deep and patting it down with soil and fertilizer. They sprinkle water to keep the dust down.

“Pipes had to be dug to draw up water to plant forests in these wastelands as desertification grows more severe,” the Suwon mayor said.

“Because water straight from underground is too cold, it has to be stored in a tank for half a day before it is poured on the trees.”

The mayor lead a group of 47 Suwon city officials, citizens and college student volunteers of the Human Mongolia Project Team, a nongovernmental organization. Along with 50 Mongolians, they were busying planting trees on May 21 that they hope will one day grow into the “Suwon Citizens’ Forest.”

By the next day, these groups of volunteers had to plant 500 trees, including Siberian Elms and indigenous “chacargans,” also known in Mongolia as “vitamin trees.”

By next month, the team plans to plant 9,000 more to reach its target of planting 10,000 trees this year as a part of “Suwon Citizens’ Forest,” the Korean city’s answer to combating desertification and serious warming in the Mongolian desert.

From last year, Suwon City committed 1.5 billion won ($1.27 million) per year to the project that aims to plant a total of 100,000 trees by 2020 in the Erdensom Desert. Last year, the city entered into a memorandum of understanding with Mongolia to plant the forest. The project was the Suwon mayor’s first international environmental project since he took office in July 2010.

The annual average temperature of Mongolia increased 2.1 degrees Celsius (35.78 degree Fahrenheit) between 1940 and 2009, and Suwon City expressed its hopes that the project can help raise global awareness about the seriousness of climate change and strengthen the city’s relationship with Mongolia.

On his visit, the mayor also inspected the 10,000 trees planted last year. Of these trees, about 90 percent were growing well. Having taken into account that the trees could easily wither in less than a month after being planted, the project had employed 25 Mongolians to inspect and maintain the trees. “Desertification and yellow dust storms caused by global warming are having a direct effect in Korea,” the mayor said. “To fight back against yellow dust storms, Suwon City and its citizens took the lead by first blocking desertification in Mongolia.”