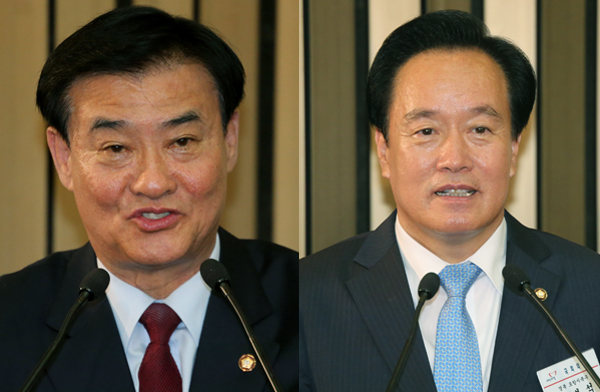 
The ruling Saenuri Party yesterday elected Representative Kang Chang-hee, a six-term lawmaker and a political advisor to Park Geun-hye, as its candidate for Assembly speaker. 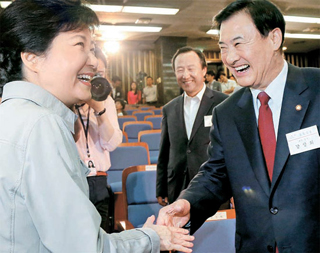 It is customary for the speaker position to go to the largest party, which in this case is the ruling Saenuri Party, as it won a majority of 150 seats in the April general elections.

Of the 150 lawmakers, 136 were available to cast their votes yesterday. Kang won 88 votes while Chung only got 48.

Representative Lee Byung-suk, a four-term lawmaker who is considered to be part of the pro-Lee Myung-bak faction, was elected to support Kang as the Assembly’s vice speaker.

With a Park loyalist in the parliamentary chief post, presidential hopeful Park has now gained more influence and control over the ruling party and the legislature in the months leading up to the presidential election in December.

Last month, the Saenuri Party elected Representative Hwang Woo-yea as its new chairman. Hwang is known as a reformist but he has maintained a close relationship with Park.

Representative Lee Hahn-koo, who is referred to as Park’s economic tutor, was elected as the new floor leader while Representative Suh Byung-soo, a key Park loyalist, was named as secretary general of the ruling party.

The political life of Kang, the new Assembly speaker, has been full of ups and downs.

A graduate of the Korea Military Academy, Kang entered politics in 1981 after retiring from the military as a lieutenant colonel. He joined the Democratic Justice Party, a political party created by former president Chun Doo Hwan, who seized power amid the chaos that followed the assassination of Park’s father, Park Chung Hee. Chun was then an Army officer and had taken care of Kang as a military senior.

In 1983 - at the early age of 37 - Kang ran for a lawmaker seat for the 11th National Assembly and he was elected to represent his hometown in the Jung District in Daejeon.

He joined the United Liberal Democrats in 1995 led by Kim Jong-pil but was later expelled due to internal conflicts. Then-leader Kim is known to have emphasized “political compromise,” while Representative Kang stressed “following principle.” Kang then joined the Grand National Party, now the Saenuri Party, in 2001, where he built close relations with Park Geun-hye.

“I will not forget my original intention as a politician,” Kang said yesterday in his acceptance speech. “As National Assembly speaker, I will defend the country’s constitutional values and identity.”

Vice speaker Lee is from Pohang, a port city in North Gyeongsang, where President Lee is from, and also graduated from Korea University.

Lee ran for a lawmaker seat in 2000 for the 16th National Assembly general elections and was elected to represent his hometown in the Buk District of Pohang.