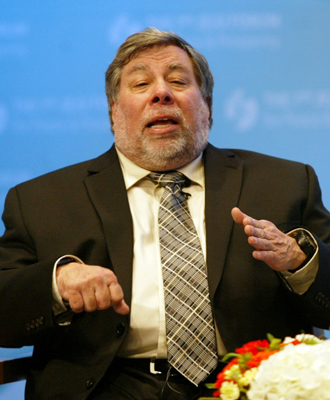 JEJU - Steve Wozniak, co-founder of Apple, speculates that the next innovative product after smartphones will be a device that can respond emotionally to humans.

Hundreds of attendees flooded the 7th Jeju Forum for Peace and Prosperity on Thursday to attend a special session with the world’s top IT guru and hear his ideas and thoughts on the upcoming future of mobile devices and his life and career.

“What I really would like is to use my voice,” he said. “To just ask a question on a device and get an answer from it or ask it to do something for me, to call or to navigate something for me.”

Wozniak said that Apple’s voice function “Siri” was the first move toward this innovation. He explained that a mobile device will develop into understanding not only languages, but also the emotions and facial expressions of humans.

Through the highly intelligent device, he said, “I don’t have to think how I have to accomplish a task. I just speak to it like a human and it understands me.”

When asked about the “post-PC era,” Wozniak speculated that more and more people will work with their mobile devices such as tablets, replacing personal computers.

“I pretty much believe that the ‘PC era,’ when work was done only with PCs, that’s over,” he said. “We will move toward mobile devices. Every single thing you do on your mobile device has an equal amount of computing, actually more - it will be done in the cloud.”

“Laptops are still hanging around,” he said. “The trend will be toward mobile devices, getting smaller and slimmer.”

As one of the key factors of Apple’s success, Wozniak recalled his late partner, Steve Jobs.

“More than anything else, the key contributor was Steve Jobs - his style, abilities and brilliant knowledge about what’s right or wrong for products,” Wozniak said. “He never got hung up with ‘I want to somehow make the most money in the world.’ Instead, he thought, ‘How can we make a change in the world in a positive way.’ ”

He also mentioned Apple’s engineers care for every single detail of a device, which was learned from Jobs.

“What Apple is good at is looking at tiny little details and knowing that things don’t look as they should,” he said.

“Engineers are so careful about how to connect wires or raw pieces of software, and that’s a type of art.”

A question followed on the controversial fight between Samsung and the Apple over smartphone patents. Wozniak said he doesn’t regard it as a big deal.

“In terms of smartphone, the Android operating system allowed Samsung to build products that look very similar to what it come to be known as the format of Apple.”

“Samsung is a huge company that has many divisions and so is Apple. It’s only one area that overlaps.”

Asked how gigantic IT companies such as Nokia or RIM, which are losing ground, could survive in the fast-changing IT environment, Wozniak said that they need to look toward the future and invest in research and development.

“When the iPhone came out, it was a new type of platform and Nokia said, ‘We are not impacted at all,’ but in a few years, they were impacted,” he said.

“Companies like Nokia and RIM are in deep trouble and they really should think what the future will be like and where the future is really heading, and reform themselves and have some research and development for the next two or three years, even though it doesn’t make money.”

The last question at the Q&A session was about his life. A middle school girl asked if he ever had hard times and how he overcame them.

“I had a hard time. I was very shy. I have a very bad memory of middle school, because I was left out from all of the social groups,” he said. “I was very strange, different and weird.”