Stability of Korea a key topic at Jeju peace forum

Stability of Korea a key topic at Jeju peace forum 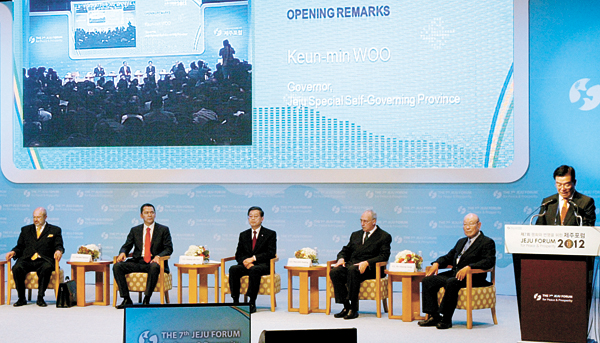 
JEJU - North Korea’s military provocations, widening social and economic polarization and unpredictable climate change are three key issues the international community should focus on, in pursuit of the Asia-Pacific region’s future prosperity and security, Prime Minister Kim Hwang-sik said at the opening ceremony of the 7th Jeju Forum for Peace and Prosperity.

Titled “New Trend and the Future of Asia,” the three-day forum will end today, successfully wrapping up discussions on a wide range of issues from politics, economy and culture.

“One of the biggest factors in the Asia-Pacific region’s security is North Korea,” Prime Minister Kim said. “The international community should show a united attitude toward the regime so that their new leadership can move forward on economic reform and denuclearization.

“We need to apply the wisdom of a win-win strategy to ease the economic gaps among countries, because widening economic polarization could threaten security and peace in the region,” Kim said. “For sustainable prosperity in the Asia-Pacific region, each country should also reduce the use of fossil fuel and immediately launch a strategy of eco-friendly development.”

With the two Koreas still technically at war, concerns are lingering over another conflict in the Asia-Pacific region.

“If we are looking for virtuous circles - the U.S. presence in Japan and in South Korea and its potential for positive outcomes for China could be enhanced by the Chinese joining in to encourage the North Koreans into a peaceful reunification with the South,” Australian former Prime Minister PJ Keating said. “Indeed, such a cooperative structure should encourage China to participate in the region rather than seek to dominate it.”

Jeju governor Woo stated that the forum is part of efforts to develop Jeju as an international convention venue.

“Although Jeju Island is a tiny island, our will and desire to share the visions and cooperate with people all over the world is not that tiny at all,” Woo said. “Overcoming the sad history of the April 3 Massacre 64 years ago, Jeju has been writing its own history as one of the world’s peaceful islands, developing into an international and eco-friendly city and a symbol of the reconciliation of the two Koreas.

“Boosting Jeju as the center of the international community, we hope this forum will develop into a worldwide venue for international discussions, just like the World Economic Forum in Davos,” he said.