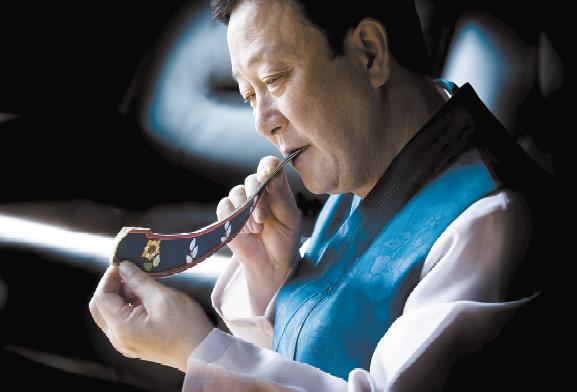 
In “Wedding Shoes” by Kim Yong-ik (1920-95), a short story that ran in Harper’s Bazaar in 1956, the protagonist is bewildered as he watches a hwahyejang, or shoemaker, craft traditional footwear.

He describes the hammering of silver nails into leather soles and the bright, colorful silks that are glued onto the sides. The story about the son of a butcher who falls in love with the daughter of a leather shoemaker was later translated into Korean with the title “Ggotsin” (“Floral Shoes”) and became a widely read and talked about piece on the peninsula.

The shoes themselves are now even referred to as ggotsin in Korea.

Traditional shoes often surface in Korean art and literature, their floral patterns seen in the works of renowned painters and their journeys poetically described by trot musicians. But it is safe to say that no other figure is more passionate about the trade than Hwang Hae-bong, Korea’s intangible cultural property No. 116.

The government designates someone as an intangible cultural property when he or she is deemed qualified to carry on a specific traditional practice. Hwang, 60, is the only hwahyejang in Korea today.

Just like the protagonist in “Floral Shoes,” Hwang held his breath as he watched his grandfather lower his glasses to the tip of his nose and adroitly weave boar’s hairs with every stitch. Hwang’s grandfather, Hwang Han-gap (1889-1982), was also an intangible cultural property - No. 37.

In fact, Hwang Han-gap didn’t want his grandson to get into the shoemaking business, saying that the trade didn’t earn enough money. But the Hwang Hae-bong worried these shoes would disappear with the passage of time if he didn’t carry on the practice.

After Hwang Hae-bong’s father passed away in 1978 and his grandfather in 1982, he had to polish his skills and practice what he had picked up by watching his grandfather craft the footwear.

While it was clear the skill ran in the family, it took the younger Hwang some time to catch up with the technique and precision of his elders.

In 1999, at the age of 47, Hwang received the President’s Award in Traditional Craft and five years later became an intangible cultural property himself.

While some Koreans think that traditional Korean shoes are made of rubber, that is a common misconception. It is the leather footwear from the Three Kingdoms era (57 BC-668) that has been passed on through the generations.

He is intangible cultural property No. 116 and the only hwahyejang, or traditonal shoemaker, in Korea today. By Kwon Hyeok-jae

“Rubber shoes came to the Korean Peninsula in the 1920s and were popular because they were cheap and practical,” Hwang said early last month as he prepared for an exhibition of his works in Samseong-dong, southern Seoul.

Hwang’s ancestors had been prominent leather shoemakers in Hanyang, Seoul’s old name. In particular, Hwang’s grandfather - who was a third-generation leather shoemaker himself - was thought to be the best of the entire Joseon Dynasty (1392-1910). It was him who made the ceremonial shoes for King Gojong (1852-1919).

According to Gyeonggukdaejeon - Joseon’s book of law first written in 1397 - there were 30 hwahyejang in the Joseon court. The Cultural Heritage Administration says that such figures show there was historically a high demand for the shoes.

“My grandfather would tell me about Gojong’s enthronement with much pride. But he also told me stories of how he had to make white shoes for those mourners who came to the funeral of Queen Min (1851-95),” Hwang said. “He made them with tears. Being the best shoemaker, he couldn’t avoid the duties.”

After the Gabo Reform of 1894, during which Korea tried to embrace modern lifestyles as well as political, economic and social ideals, traditional leather shoes with floral patterns fell out of favor.

Even the best in the country, Hwang’s grandfather, received just a few orders a month, mostly for toddlers for their first birthday parties during which parents dress them up in traditional attire.

Things have changed over the past couple decades, especially since the 1986 Asian Games and 1988 Summer Olympics, both of which were held in Seoul. The events put Korea on the map of world culture and art and global interest in Korea’s traditions grew.

Hwang said orders for traditional shoes have surged in recent years, slowly but steadily. Most of the orders come from people who want traditional attire for special days of their lives like weddings. 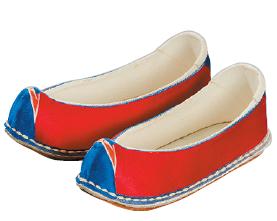 Actress Jeon Ji-hyun, who got married to the grandson of renowned designer of hanbok, or traditional clothing, Lee Young-hee, also asked Hwang to make traditional shoes for her wedding.

Korea’s ggotsin are crafted through a total of 72 complicated, painstaking procedures. It takes three to seven days to make one pair when the artisan works six hours a day. Prices also range from hundreds of thousands of won to millions of won.

But the grace and beauty of well-made traditional shoes are not inferior to luxury designer brand shoes of today, Hwang said.

“The biggest charms of traditional shoes are in the curvy side lines and sharp frontal tips of the shoes,” Hwang said.

“They may seem uncomfortable, but as you wear them they change to the shape of your feet. The shoes change themselves to suit your feet with the passage of time.”