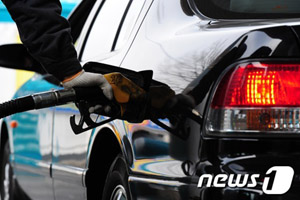 The country’s average gas price dropped below 2,000 won ($1.69) for the first time since February, and the industry predicts the fall will continue for a while.

According to a report yesterday released by Opinet, an official Web site run by the Korea National Oil Corporation (KNOC), the average gasoline price reached 1,999.93 won per liter (33.8 fluid ounce) as of yesterday, falling below the 2,000 won mark for the first time in 97 days, or since Feb. 27.

KNOC forecast the falling trend in retail oil prices is expected to continue because international oil prices are on the decrease due to the euro zone’s fiscal crisis and signs of a weak economy in the United States.

According to KNOC, the future price of the Western Texas Intermediate crude oil for July dropped by $3.3 from the previous day, finishing at $83.23 per barrel on Friday at the New York Mercantile Exchange. That was its lowest price since Oct. 7.

The price of Brent oil was $98.08 per barrel, down by $3.79 from day earlier on London’s ICE Futures Exchange.

“The possibility of Greece’s exit from the euro zone, which will be determined by the result of its second election on June 17, will make international oil prices decline further,” KNOC said in a report.

It also said that the latest downgrade of Spain’s credit level from ‘BB-’ to ‘B’ Tuesday by credit rating agency Egan-Jones added to the falling prices.

The news that claims for unemployment benefits in the United States rose and that the country’s oil inventories have been increasing for 10 consecutive weeks until May 25 played a significant role in lowering oil prices, the report said.

However, the oil industry says the Iran nuclear issue remains an uncertain variable that might make prices surge again.

“It seems there are numerous difficulties at the third round of negotiations between Iran and Western countries on halting Iranian nuclear activities, slated for June 18.

“The Iran issue will remain a factor that will cause oil prices to rise in the future,” an industry official said.