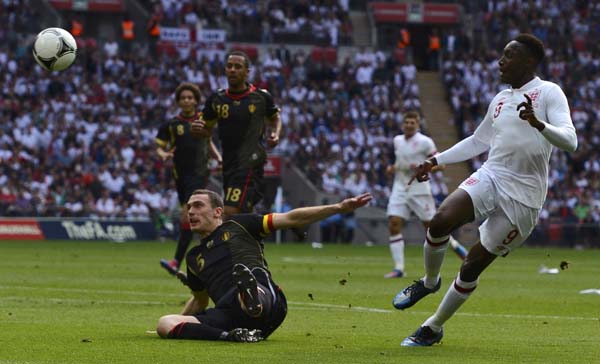 PARIS - England completed their preparations for Euro 2012 with a 1-0 friendly win over Belgium at Wembley on Saturday, while the Netherlands romped to a 6-0 success over Northern Ireland in Amsterdam.

Portugal, however, saw Cristiano Ronaldo fail to convert a penalty in a 3-1 loss at home to Turkey that left them without a win in three matches.

England secured victory through a 36th-minute goal by Manchester United striker Danny Welbeck, his first for his country, to register a second consecutive 1-0 success following an earlier win over Norway in Oslo in Roy Hodgson’s first game in charge.

England open their Euro 2012 campaign against France in Donetsk a week from today, although they showcased plenty of defensive resilience against an enterprising Belgian team, they will face a much stiffer examination from Laurent Blanc’s men.

Indeed, Marc Wilmots’ side could even have returned home with a draw, but full-back Guillaume Gillet’s rasping 78th-minute drive hit the post.

The hosts also struck the woodwork late on, through substitute Jermain Defoe, while Wayne Rooney’s assured late cameo underlined just how much he will be missed when he sits out England’s first two games due to suspension.

“We’ve got another few injury concerns. Gary Cahill is slightly more of a concern because it’s a jaw injury,” Hodgson said.

Beaten finalists at the last World Cup, the Netherlands proved that they will once again be a force to be reckoned with in Poland and Ukraine by trouncing Northern Ireland 6-0 in their final warm-up match.

A brace from in-form Arsenal striker Robin van Persie, one a penalty, coupled with goals from Wesley Sneijder - a 25-yard free kick - and Ibrahim Afellay, put Holland 4-0 up at the break.

Further goals in the second half from Barcelona forward Afellay and center-back Ron Vlaar added extra gloss to a one-sided victory.

The Netherlands start the Euro against Denmark in Kharkiv on Saturday and the Danes also enjoyed victory last Saturday, prevailing 2-0 against Australia thanks to a penalty by Liverpool defender Daniel Agger and a close-range Bjelland effort.

Portual, who make up Group B along with Germany, wrapped up their preparations in disappointing fashion by losing to Turkey in Lisbon, having previously recorded a pair of goalless draws against Poland and Macedonia.

Co-host Poland completed their preparations in style, crushing minnows Andorra 4-0 to extend their unbeaten run to four games - a run during which they have not conceded a goal. AFP