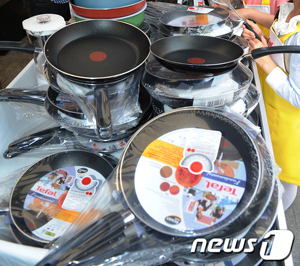 Following inspections of prices on imported baby strollers and irons in recent months, the Fair Trade Commission is cracking down on overly expensive frying pans from abroad.

Joint research from the Fair Trade Commission and the Korea Federation of Housewives Clubs found that eight popular frying pans from five European brands can be three times more expensive in Korea than in Europe, even though the prices fell an average of 8.3 percent after the free trade agreement with the European Union came into effect last July.

Importers and distributors mark up the prices to make money, the two organizations claimed.

“The margins that importers and distributers take are actually 1.9 times the actual import prices,” said the federation in a statement. “Even if labor costs and management fees are taken into account, the retail prices of imported frying pans are still very high.”

The study conducted from April 25 through May 5 revealed that department stores charge the most. Large discount chains such as E-Mart and Lotte Mart charge 20 percent less than department stores, while online shopping malls are 30 percent cheaper.

Frying pans from three brands - Fissler, Woll and WMF - are up to 57.4 percent more expensive than those at department stores in France, Germany, Italy, Britain, the United States and Japan.

Details can be found at smartconsumer.go.kr