Outside directors a mere formality

Outside directors a mere formality 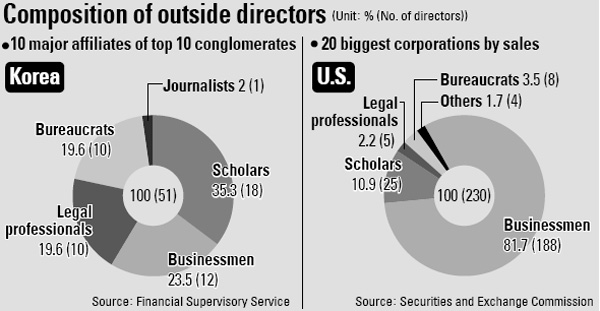 Exor, the holding company of Italian automaker Fiat, recently appointed Jay Y. Lee, chief operating officer of Samsung Electronics, as its outside director. Lee was given a seat on the company’s strategy committee and is the first Korean businessman to become an outside director of an overseas-based company.

Yet outside directors of domestic companies are seldom from business backgrounds. According to the Financial Supervisory Service, former or current scholars account for 18 of the 51 outside directors at 10 major affiliates of the biggest conglomerates in the country.

This ratio differs starkly from the environment in the United States.

Only 12 outside directors have experience in business-related management. Moreover, only five of them are currently involved in management. The rest are legal professionals such as judges and prosecutors as well as former bureaucrats from the National Tax Service and Fair Trade Commission.

“The government started mandating appointments of outside directors when a business culture that stresses shareholders’ interests has not taken root,” said Kim Hyun-jong, a senior researcher at the Korea Economic Research Institute.

“Thus, companies tend to see outside directors as a legal requirement rather than a tool to rationalize business.”

It was during the Asian financial crisis in 1998 when the government started requiring appointments of outside directors at listed companies.

Under the law, outside directors are required to make up more than half of the board at corporations with total assets of 2 trillion won ($1.7 billion) or more.

But as they were suddenly required to do so, companies appointed outside directors as a formality - a practice that persists at local corporations.

“Outside directors are appointed as a way to save face or minimize business risks rather than to actually help business,” said Kim Sun-woong, executive director of the Center for Good Corporate Governance.

“Outside directors are appointed often because they have a friendly relationship with management,” said Song Min-gyeong, a researcher at the Korea Corporate Governance Service. “They are used by the management rather than consulted as representatives of shareholders’ interests.”

It is rare for outside directors at local corporations to raise objections to decisions made by the management, according to the Financial Supervisory Service.

At the 10 largest companies in terms of market capitalization in the country, outside directors never raised objections to management decisions last year except for those at SK Hynix and Shinhan Financial Group.

At some Kosdaq-listed companies, less than half of the outside directors even showed up at board meetings. There were some who never showed up to meetings.

“Because they do not know much about business activity, they act as ‘yes men’ rather than supervisors,” said Kwon Oh-in, an economic policy manager at Citizens’ Coalition for Economic Justice.

In a book titled “The Rise of the Rogue Executive: How Good Companies Go Bad and How to Stop the Destruction,” Leonard Sayles, a former Columbia University professor, wrote that the best consultant is an experienced and able outside director.

In Korea, Samsung Fire and Marine Insurance has appointed SK Group CEOs as outside directors since 2005.