In Sejong City, a few families are making it work

In Sejong City, a few families are making it work 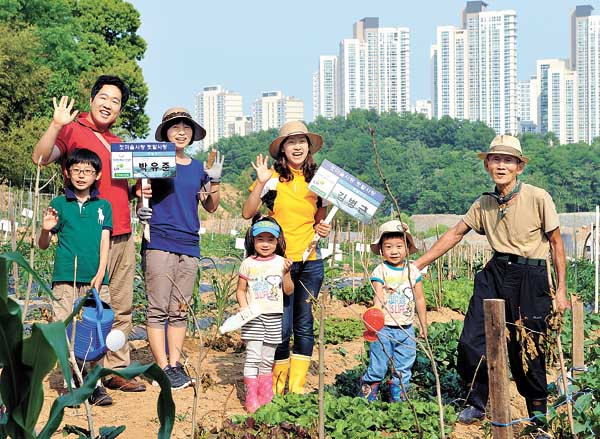 Park Yu-jun, in red, and his family show off their weekend family farm in Sejong City on May 26. By Kim Sung-tae

SEJONG CITY - On a Saturday afternoon, Park Yu-jun, a 37-year-old public servant, and his family walked out of their apartment carrying farming tools and headed to their weekend farm. It took just 10 minutes for the family to walk to the 12 square-meter (129 square feet) vegetable garden in their neighborhood.

Park and his wife, Bae Gyeong-seo, and their 11-year-old son Jun-yeong, busily removed weeds from the garden and watered the lettuce. After working for a while, the family picked some lettuce for their dinner table.

“It is impossible to walk to a weekend farm in Seoul,” said Park, a rank-and-file public servant of the Aviation Policy Division of the Ministry of Land, Transport and Maritime Affairs.

The Park family lives in Cheotmaeul, the first village of the country’s administrative capital. Park and his family moved from their home in Anyang, Gyeonggi, to the village at the end of December last year.

They made the decision to move ahead of Park’s ministry’s relocation to the administrative capital as the jeonse (rental housing payment) for their apartment exceeded the purchase price of an apartment in Sejong City at 224 million won ($190,164).

A month is still left until the official launch of Sejong City, but the Parks have already lived here for six months. According to Park, he is currently commuting to his office in Gwacheon, Gyeonggi. And there are about 130 other public servants who already moved here before their ministries’ relocation and commute to Seoul and Gwacheon as well. They use the buses provided by the Ministry of Public Administration and Security.

“When I made the decision to leave our home in the capital region, we worried that we could be pushed out of competition and become losers,” Park said. “But that was a groundless worry.”

Park, a native of Seoul, said he is satisfied with the quality of life here, and his wife agreed. “The view of the Geum River and nearby scenery from our apartment is as beautiful as that of the Han River,” Bae said.

Located 120 kilometers (74.5 miles) south of Seoul, Sejong City is the country’s new administrative capital. It took a decade for this brainchild of the late President Roh Moo-hyun to become a reality. The government aims to develop the mini-capital as a self-sustaining city with a population of 500,000 by 2030.

As of now, 37.5 percent of the total budget of 22.5 trillion won has been spent on infrastructure, residences and the new government complex. The city will have a grand launch ceremony on July 1.

The first village of the Sejong City has 6,520 apartment units. As of Thursday, 1,963 households have completed their move. Of the residents, 19.3 percent were from Seoul, Incheon and other Gyeonggi cities, while 74.3 percent were from nearby cities and villages in Chungcheong provinces.

“You can go anywhere on the peninsula within two hours,” said Mo Mimi, a 42-year-old housewife who moved to Sejong City from Jamsil, southern Seoul. “So we go on a trip every week. And the living expenses are about 20 percent cheaper than what we used to pay in Seoul.”

Not all, however, are as happy as the Parks.

“Because there are no bookstores or stationary stores, we have to drive 15 minutes to Daejeon to buy school supplies for our children,” said Song Seong-yeon, a 42-year-old housewife. Sejong City’s first village will have four schools opening in March.

The village also has no hospital or drug store, but three supermarkets, five banks, one dry cleaner and 20 restaurants have opened up.

Lee Eun-yeong, a 39-year-old public servant for the Prime Minister’s Office, said she will soon be separated from her husband because her office will relocate to Sejong City in September. Because her husband has a business in Seoul, she and her 7-year-old daughter will move to Sejong without him.

“I am so worried about finding a nanny who can watch my girl until I come home,” Lee said. “I wonder if I can find a suitable person because Sejong City is not settled yet.”

Another mid-ranking official of the Ministry for Food, Agriculture, Forestry and Fisheries said he is worried about extra costs because of the inconvenient timing of the move. Although 80 percent of the ministry, including him, purchased apartments in Sejong City, construction of their homes only will be completed as early as June next year - and some of them will be completed in June 2014.

“Conditions are getting better,” said Nam Il-seok, an official in charge of relocation service at the Multifunctional Administrative City Construction Agency. “About 10 hospitals and clinics are expected to open in the commercial complex in the second apartment bloc.”