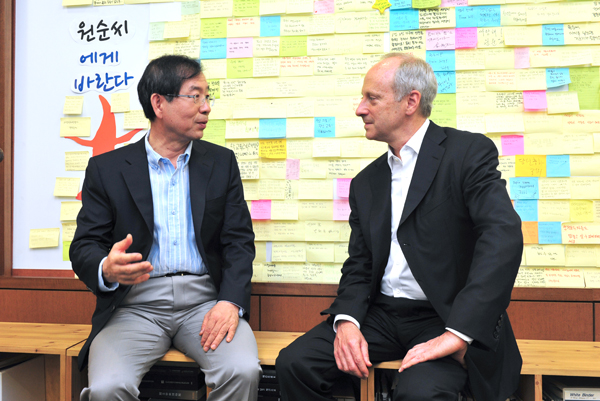 Economics has “crowded out democratic politics” in most democratic societies, said Michael Sandel, Harvard professor, political philospher and bestselling author of “Justice: What’s the Right Thing To Do” in Seoul yesterday.

The 59-year-old professor met with the Seoul Mayor Park Won-soon in his office in City Hall, central Seoul yesterday, in a discussion attended by the JoongAng Ilbo, JTBC and the Korea JoongAng Daily on the role of companies and markets in Korea.

They discussed a range of social issues in Korea and other democracies, including the role of old boys’ clubs in Korea, mutual back scratching and fairness in society.

Sandel said that democratic societies today face “growing frustration with politics, with the established political parties” and that “there is a widespread sense that public discourse is failing to address the questions that people really care about.” Even the ongoing financial crisis has not led many countries to a serious debate about the role of money and markets.

Referencing a survey conducted jointly by the Asan Institute for Policy Studies and Sandel on Korean and U.S. society, he said 74 percent of people surveyed in Korea believed that society was unfair, while in the U.S., only 38 percent did.

“The survey only measures public opinion and not the objective reality,” Sandel said.

“That doesn’t necessarily reflect the reality of the situation; that reflects public opinion about matters and affairs. I think the low figure for American public opinion reflects a certain complacence among Americans about the fairness of American society.”

He added that the fact that almost three-quarters of Koreans believe their society is unfair “reflects a growing awareness of the challenges.”

Park, who had a copy of Sandel’s latest book, “What Money Can’t Buy,” described to the professor some of the policies he has implemented, including his policy to give 1,100 non-regular workers within the Seoul Metropolitan Government regular worker status, costing the city 8 billion won ($6.8 million). He also mentioned policies to protect small businesses from supersized ones, and his move to send Jaedol the dolphin back to the waters, “even at the cost of taking away children’s joy of watching the dolphin show” at Seoul Zoo.

The mayor sought advice from Sandel regarding the practice of “jumping the queue” in Korean society, citing the cases of the affluent using their wealth and personal networks to get access to medical assistance. “Why not make these people pay high fees and then use the money to fund medical fees for the poor?” asked the mayor.

Sandel responded that this was a case in which conflicting values needed to be balanced: raising revenues to fund medical care for the poor was one thing, but so was the principle that medical care should be based on need. He used an analogy of donation-based universities admission, where positions could be auctioned to the highest bidder and the proceeds used to fund scholarships.

“It would generate revenues that would help poor students, but the idea of auctioning off access to a university violates something about the character and purpose of higher education which is that it is not and should not be about maximizing market revenue but about promoting academic excellence,” he said.