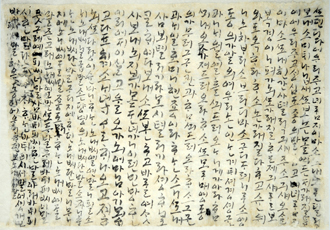 Letter Na Sin-geol wrote to his wife as he went to his job in Hamgyeong (early 16th century).

In faraway posts on fierce battlefields fighting off the Japanese, the husbands of the Joseon era (1392-1910) reached out for a brush and wrote to their wives.

They had a lot to ask about.

Are the servants acting obedient and staying away from trouble? How was the child’s first birthday party and what did he pick in doljabi [where the child is supposed to choose from an array of items like cash, pens and thread, each symbolizing wealth, intelligence and longevity]?

With recent news of a restoration of a Hangeul letter that Na Sin-geol (estimated to have lived between the mid-15th century and early 16th century) wrote to his wife of the Sinchang Maeng clan, Hangeul letters exchanged between the husbands and wives of the Joseon time are emerging under a clearer light. 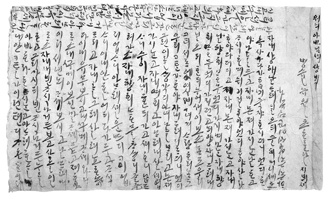 The 500-year-old letter was discovered in May of last year while Na’s descendents were moving some of their ancestors’ tombs to a new location. The National Archive of Korea announced on May 20 that it had completed the restoration and would display it at the Daejeon History Museum, slated to open in October.

Hangeul was created in 1443 and Hangeul letters written between then and the 19th century amount to around 2,500. Of them, about 1,000 are ones exchanged between husbands and wives.

Along with Na’s letter, two other letters - one written by the wife of Lee Eung-tae (1556-86) and another by Gwak Ju (1569-1617) - have also awed historians for the sweet, loving words exchanged between the husbands and wives in Confucian, conservative Joseon society where gender inequality was evident and candid expression of affection between men and women was not encouraged.

Na worked as a soldier, and he lamented in his letter how he had been away from home too long. “I wanted to go home and see everyone - my mother and our baby, but I couldn’t. It is very regrettable and sad,” he wrote. He added that he was sending face powder for his wife - a very precious item of the time imported from abroad - and tells her to stay well and healthy with his mother and their baby. 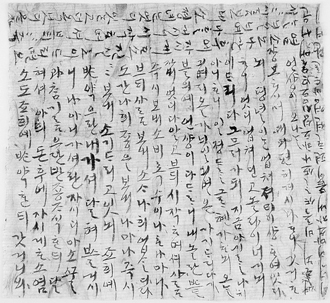 A letter Gwak Ju wrote to his wife while she was in her parents’ home to give birth to their child (early 17th century).

Gwak, meanwhile, was dying to know how his wife was doing as she stayed at her parents’ home to give birth to their children. He wrote to her on a near-daily basis. “I send you some medicine, but wait for me. When I get there, I will decoct it for you,” he wrote in one letter. “Don’t be saddened even if you have another girl,” he assured her in another. Ancient society preferred boys, since they could carry on the family name and hold rituals for their ancestors.

“You can tell from these letters that the men of Joseon aristocrats treated their wives with much courtesy. They were devoted and kind,” said Baek Du-hyeon, professor of Korean language and literature at Kyungpook National University.

Also, in the letter written by the wife of Lee Eung-tae, she wholeheartedly grieves the untimely death of her husband. “I just cannot live without you. I just want to go to you,” she wrote. Please look at this letter and tell me in detail in my dreams. [...] Look closely and talk to me.”

The letters also indicate that the women clearly had the decision making power in most of household affairs.

“Many of the letters are concerned with care of the servants and farm work. And they show how it was not unusual for the wives to handle all the household matters,” said Bae Yeong-hwan, professor of Korean language and literature at Seowon University who translated Na’s Hangeul letter.

Also interesting is the pronoun they used to refer to each other: janae, an archaic form of the modern jane, which means “you” in Korean.

“The husbands and wives of Korea between the 16th and 17th centuries both called each other ‘you,’” said Professor Hwang Mun-hwan of the Academy of Korean Studies. He added that other signs in the linguistics indicate equal status within couples. Hwang studied more than 700 Hangeul letters of the times.

He also notes how manura - a Korean word referring to wives but with a slightly condescending connotation - used to be the most honorary term for wives during the Joseon era. “Manura is an evolved version of manora - which was a title for the wives of the royal court,” Hwang said, referring to some letters from the royal families.