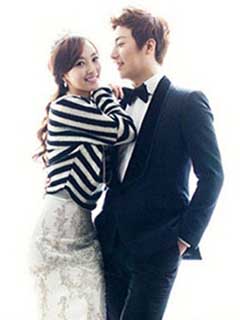 Anchorman Lee Sung-bae and TV personality and host Tak Ye-eun will walk down the aisle on June 16 at the Imperial Palace Hotel in southern Seoul.
On June 4, in-studio wedding photos of the two were revealed, generating much interest in the star couple’s nuptial.

The photo shoot took place on May 31 and a personnel from the studio in which the session took place raved about the couple.
“They were better than the models we hire. It was such a fun photo shoot and they were so polite,” the studio worker told local media.

Meanwhile, the wedding planning agency dubbed Now Wed added that Tak made sure that all staff members were looked after properly which “Impressed everyone on the set.”

The officiant of the wedding will be politician and former anchorman Byeon Woong-jeon. Meanwhile, Lee’s co-worker and newscaster Oh Sang-jin will host the festivity.
By Carla Sunwoo [carlasunwoo@joongang.co.kr]