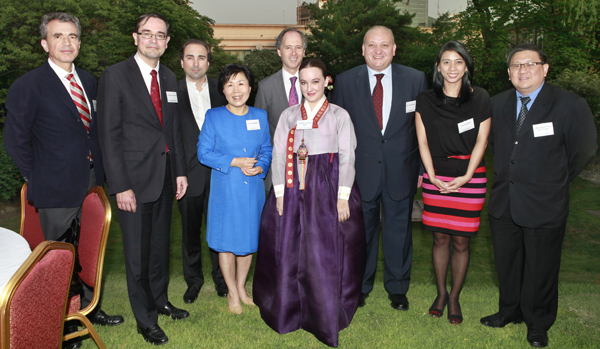 
On a recent weekday evening, the outside garden of the British ambassador’s residence in Jeong-dong, central Seoul, was crowded with a diverse group of people - a chief executive from France representing a local automobile company, the Singaporean ambassador to Korea and a Philippines-born, naturalized Korean citizen who recently became a member of the National Assembly.

Though from different working sectors, they all share the common interest of learning and sharing Korean culture as members of the Korea CQ Forum, hosted by the Corea Image Communication Institute (CICI).

The CICI has hosted the forum twice every year since 2006, offering both Korean and foreign opinion leaders a spread of arranged lectures and activities such as trips to historic sites and museums, performances of traditional Korean music and lectures by renowned Korean artists. Each forum is scheduled with 10 different programs.

The 13th CQ Forum members, for example, visited the Kokdu Museum where they were able to glimpse kokdu, hand-carved wooden figurines that were once placed with the body at Korean funerals. CQ refers to five quotients - culture, concentration, communication, creativity and cooperation. The CICI was founded in 2003 and is headed by Choi Jung-hwa, French professor at Hankuk University of Foreign Studies.

The evening at the British ambassador’s residence was in part to congratulate the graduates of the 13th CQ Forum and award several of the participants with prizes for their active participation. The grand prize that day went to Jean-Manuel Spriet, president of Pernod Ricard Korea “for his outstanding ability in cooperation, concentration, creativity, culture and communication, which he expressed by participating in CQ forums to learn about Korea and Korean culture and by sponsoring wine to strengthen the ties of friendship among members.”

“I’m actually very privileged to be part of the CQ - I was part of CQ 12 and 13 last year when I came,” said Singaporean Ambassador Peter Tan, after he received the Culture Award from CICI President Choi. He was recognized for his support of the Korea CQ, which he demonstrated by inviting the members to his residence, providing an opportunity to learn more about Peranakan culture such as Peranakan dishes and music and tourist attractions in Singapore, and also preparing a noraebang (singing room) night for the members.

“It [Korea CQ] is a very interesting networking group in a sense that it introduces me to a different dimension of people from different parts of life,” the ambassador said. “Other professionals, both locals and foreigners, help broaden my horizon.”

British Ambassador Wightman also said, “It’s been a very good opportunity as an expatriate living here to meet a wider range of Korean people that perhaps I wouldn’t have met in the normal course of professional life.”

“It’s also been an opportunity to be introduced to the different aspects of Korean culture that help broaden the experience as a foreigner,” Ambassador Wightman said, noting that the most memorable event among the programs was his first experience at a noraebang.

Ambassador Wightman was also one of the two most memorable members of the Korea CQ 14 noted by CICI President Choi. She said that although it’s been less than a year since the ambassador was appointed to his post in Korea, he has the passion to learn Korean culture as he is already a comfortable Korean speaker.

She also mentioned Jean-Manuel Spriet, president of Pernod Ricard Korea, for his hearty appetite when it comes to Korean food.

“Once, we went to a Korean restaurant together and we were all amazed to see Mr. Spriet enjoy eating suyuk [boiled beef] and tteokgalbi [Korean-style meat patties] with chopsticks,” Choi said. “He also ate a whole bowl of rice by mixing it with kimchi jjim [steamed kimchi normally mixed with meat].”

With much interest and attention given to the CQ Forum by opinion leaders in Korea, the 14th Korea CQ Forum is scheduled to begin Aug. 21. Choi said 23 participants have already signed up for the forum that continues until November.

“Anyone can become a CQ member - regardless of nationality and occupation,” Choi said. “What they should have is passion toward Korea, its culture and arts and an understanding of cultural diversity.”