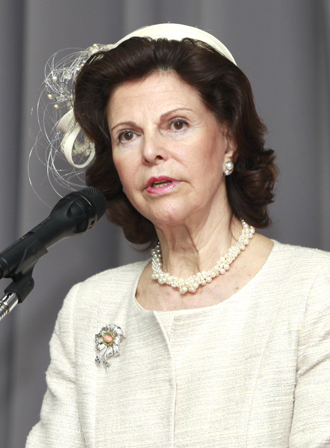 Queen Silvia of Sweden speaks Wednesday at the week-long Swedish Film Festival at Ewha Womans University which concludes today. The Swedish King Carl XVI Gustaf and the queen left Korea on Friday, after their four-day state visit. By Park Sang-moon

Queen Silvia of Sweden launched a week-long Swedish Film Festival in Seoul on Wednesday as a part of a four-day state visit with King Carl XVI Gustaf to Korea to promote a cultural exchange between the two countries.

“Even if we live far away from each other on two opposite sides of our Earth, we know culture and art is one of the best ways to get to know each other, to create curiosity and to feel the ambition to learn more about our respective countries,” said the queen at the opening ceremony of the film festival at Arthouse Momo cinema at Ewha Womans University, central Seoul, which concludes today.

The event drew diplomats, film experts, academics and also Swedish directors, screenwriters and actors, who had an opportunity to view the films afterward.

A total of seven internationally recognized Swedish films released within the past two years were screened, some for the first time publicly in Korea. Films screened included “Simon and the Oaks,” a historical film set in post-World War II Sweden, and “Sound of Noise,” which centers on a tone-deaf police officer and won the Cannes Film Festival Young Critics Award.

In her opening speech, the queen paid homage to late world-renowned Swedish director Ingmar Bergman and Oscar-winning actress Ingrid Bergman, hugely popular in Korea but poorly-known to the public as a Swede.

Annika Rembe, director general of the Swedish Institute, a public agency that promotes the country’s culture, education, science and business abroad and helped organize the film festival, said, “The Swedish government through their embassy and through the Swedish Institute have a strong interest in creating art and promoting the industry. There has been an idea of May being the month of film, especially with the Cannes Festival in France.”

Rembe also indicated that the successful event last year celebrating director Bergman at the Ewha Womans University played a role in the film festival again being held at the same venue this year.

“I hope that this film festival serves as an opportunity to promote cultural education at Ewha, deeper bilateral and cultural exchange and the experience of rich cultural diversity and creative artistic expression of different geographical backgrounds,” said Kim Sun-uk, president of Ewha Womans University.

Earlier that day, the queen attended a luncheon at Ewha organized by the school’s president with other Korean female leaders in academia, business and government.

The German-born queen also had an opportunity to speak with Ewha students, and she expressed her delight when she was able to speak to some of the German institute students in her native tongue.

Before leaving Seoul to head to the ongoing Yeosu World Expo, the last leg of their activities in Korea before departing Friday, the king and queen held a press conference at the Hotel Shilla, central Seoul, on Thursday.

King Carl, who has visited Korea five times before, held bilateral talks with President Lee on economy, science and trade. He also pledged Sweden’s support to help maintain peace between the two Koreas.

“We need to stay as long as needed,” he said, emphasizing his country’s role of neutral observer in the form of 1,000 Swedish officials serving at the Demilitarized Zone since the Korean War ended in 1953.

Queen Silvia said regarding her visit that she was delighted to visit Korea for a second time and said, “I am very happy of course to meet the president and the first lady who had been to Sweden before and visited us privately.”

The Swedish royal couple, upon the invitation of President Lee Myung-bak, held their first official state visit to Korea from last Tuesday to Friday, marking 60 years of diplomatic relations between the two countries.

The Swedish royalty visited the National Museum of Korea and Panmunjom, the truce village located on Korea’s border with the North. Heading a 40-person delegation from Sweden, they also attended business, innovation and science forums.