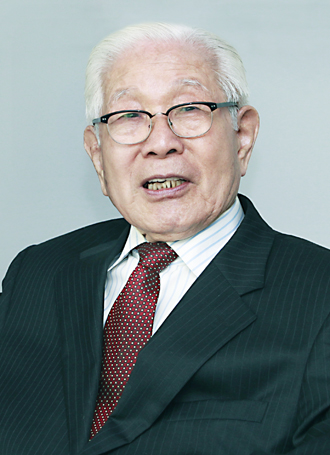 Chi Kap-chong, chairman of the United Nations Korean War Allies Association, became an honorary officer of the New Zealand Order of Merit yesterday for his contributions toward enhancing the country’s relations with Korea over the past several decades.

An award was given to the 85-year-old yesterday at the New Zealand Embassy in Jeong-dong, central Seoul, the day New Zealand celebrates the Queen’s birthday and Diamond Jubilee to mark 60 years of Queen Elizabeth II’s reign.

“Mr. Chi’s tireless work over more than five decades to promote a better understanding between the UN allies, including New Zealand and Korea, is highly valued by New Zealand,” said Patrick Rata, Ambassador of New Zealand to Korea, after delivering two official letters of announcement to Chairman Chi respectively on behalf of the Prime Minister and the Governor-General.

“In particular, Mr. Chi was instrumental in establishing the New Zealand Anzac [the Australian and New Zealand Army Corps] memorial in Gapyeong [Gyeonggi] in which the Prime Minister of New Zealand, John Key, attended a wreath laying ceremony in March [when he visited to attend the Nuclear Security Summit].”

Chairman Chi, who was previously a journalist and a member of the Korean National Assembly, founded the UN Korean War Allies Association in 1963.

He has focused on making sure that war veterans and the roles they played in the Korean War are remembered by current and future generations of Koreans. He has also received 10 other similar badges from countries including Canada and Australia.

“I’m happy to be able to receive the noble and highest medal from New Zealand today,” Chairman Chi said in his acceptance speech.

“At the same time I feel more responsible to work for another decade to enhance the relationship between New Zealand and Korea.”

Chi reminisced that while he was a war correspondent for Reuters during the Korean War, many of the countries reported news coverage about the achievements of other veterans in Korea that were mainly on the frontline like American and British soldiers, but not much has been covered about New Zealand veterans.

Chairman Chi is one of the few non-New Zealanders included in the list to receive the medal of becoming an honorary officer of the New Zealand Order of Merit along with Prince Philip, Duke of Edinburgh.

Chi is also the third Korean citizen to be given an Order of Merit by the New Zealand government after respective ones given to Park Young-in, president of the Korea-New Zealand Association in 2002 and to Sonia Hong, then representative of the New Zealand Tourist Board’s Korean office, in 2006.

The honors are issued twice a year, on New Year’s and on New Zealand’s observance of the Queen’s birthday, which is on the first Monday in June.

“The New Zealand honor system is a way for our country to formally acknowledge outstanding service,” Ambassador Rata said.