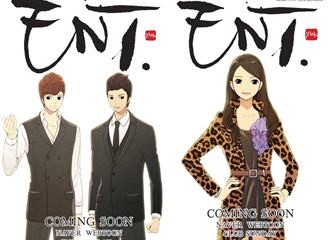 On May 29, the first preview episode of a webtoon featuring artists belonging to Korea’s SM Entertainment was unveiled online in Japan.

The first episode of “ENT” managed to become the most viewed cartoon on the day through Japan’s leading manga publisher Shogakukan’s Web site.

As well as topping the manga chart on the publication’s free-for-viewing Web site, the cartoon managed to garner thousands of mentions on Yahoo Japan.

The next day, in the “Weekly Young Sunday,” an advertisement of the webtoon with the members of Girls’ Generation on display was published. Other cuts contained illustrations of singers such as TVXQ, BoA and SHINee.

The series will feature various acts belonging to SM Entertainment as the plot is about an idol singer who becomes involved with a fan fiction writer.

The series will be published via Naver from July 7. The webtoon is set to also incorporate songs sung by artists from SM Entertainment. Shogakukan is one of the leading publication companies in Japan.