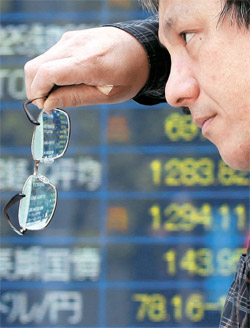 The stock market nosedived yesterday on disappointing news regarding U.S. jobs and deepening woes in the euro zone.

The Seoul main bourse fell more than 51.38 points or 2.8 percent from the previous close Friday.

It was the sharpest drop since May 18, when the stock market plummeted 62.78 points or 3.4 percent from the previous day’s trade.

Fears of a slowing global economy were amplified after the U.S. government Friday announced feeble job growth in May. Only 69,000 jobs were created that month and the unemployment rate rose from 8.1 percent in the previous month to 8.2 percent.

The news caused Wall Street to sink 275 points, the biggest drop since November.

The jobs announcement came after the U.S. government said its economy grew just 1.9 percent in the first quarter of this year.

As fears over the euro zone crisis and a sinking global economy deepen, foreign investors - particularly European - have been fleeing the local stock market.

Foreign investors earlier this year were net buyers, and in March and April their holdings of Korean stocks exceeded 400 trillion won. However, as the euro zone crisis resurfaces and Greece wobbles on the verge of default, foreign investors’ stock holdings last month have shrunk to 367.8 trillion won. European investors accounted for 87 percent, or 2.95 trillion won, of the local stocks that were offloaded.

U.K. investors were the largest net sellers as they dumped 1.72 trillion won worth of shares, followed by investors in Luxembourg and France. U.S. investors expanded their net sales from 283 billion won in April to 445.7 billion won last month.

“Foreign investors are trying to recoup their investment in emerging markets with risks such as downward spiraling stock markets,” said a FSS official. “Although the net selling [of foreign investors] is not at a critical level, this month there are several major issues - such as the general election in Greece, which will likely be an important turning point.”

The Korean financial regulator said it would step up its monitoring of factors that could further disrupt the stability of the stock market.

“Since Spain’s economy is five times larger than that of Greece, the impact it will have on the global economy and the financial market will be astronomical,” said Kim.

“The euro zone crisis will be recorded as a crisis equivalent to the 1929 Great Depression in the history of capitalism.”

“We will not only cut off any acts that would bring confusion to the market but also rigorously penalize those who manipulate the stock market through short selling,” Kim said.