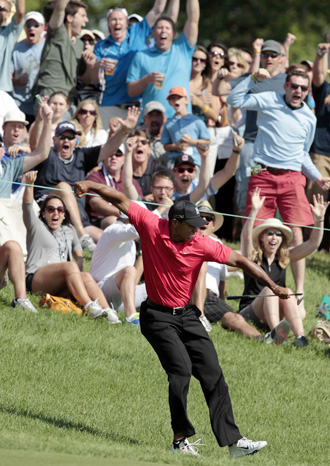 Tiger Woods reacts after chipping in for a birdie on the 16th hole during the final round of the Memorial Tournament at Muirfield Village Golf Club in Dublin, Ohio, on Sunday. [REUTERS/YONHAP]

Two shots behind with three holes to play with his ball in an impossible spot behind the 16th green, Woods holed a flop shot from 50 feet away that turned bogey into birdie and sent him on his way to a stunning comeback Sunday in the Memorial.

Woods made three birdies on his last four holes for a five-under 67, matching the lowest score of the final round, and he finished in style. He hit a 9-iron to just inside 10 feet and raised his putter - a pose Nicklaus made famous for so many years - well before the ball tumbled into the cup.

It was his fifth win at Muirfield Village and the 73rd of his PGA Tour career, tying Nicklaus at No. 2 on the all-time list. Sam Snead won 82 times.

For Woods, it was a dramatic end to his worst three-tournament stretch as a pro, and it came with the U.S. Open looming.

He started the day four shots behind and wound up with a two-shot victory over Andres Romero(67) and Rory Sabbatini, who was in control of the tournament until he fell victim again to some old magic by Woods.

Woods said he didn’t miss a shot all day, though that flop shot stands out.

Nicklaus shared those thoughts with Woods as the winner walked off the 18th green. Woods smiled and said, “How about that, huh?’’

Woods won for the second time this year, and moved to No. 4 in the world.

This was more impressive than his five-shot win in the Arnold Palmer Invitational at Bay Hill in March, when he had a one-shot lead on a course where he could get by with par. The Memorial required much more work, especially when he had to go after birdies in the final hour. And that’s what he did.

He reached the par-5 15th into the wind in two shots to set up a two-putt birdie and get within one shot of Sabbatini. But just like that, it looked as if his chances were over when his tee shot bounded through the green and into a tough lie.

Woods is famous for chipping in at the Memorial, particularly on the 14th hole. This was tougher by a mile, on fast greens with a shot that required near to perfection.

With a full swing, the ball came out soft and began tracking toward the hole. It caught the right edge of the cup and dropped for a most improbable birdie, and Woods took two steps to the left and delivered a full uppercut not seen from him in some time.

Sabbatini didn’t need to see it. He was on the 15th green, scrambling for par, when Muirfield Village shook with the loudest roar of the day. The South African suddenly was tied for the lead, but not for long. He hit his tee shot into the right bunker on the 16th, the third-hardest hole Sunday that yielded only four birdies, and then blasted out to just inside 15 feet and took bogey to fall one behind.

That was all Woods needed.

From the middle of the 18th fairway, with Nicklaus watching from behind the green, Woods hit a 9-iron to the perfect spot on the back of the green that caught the slope and rolled to just inside 10 feet.

Nicklaus always waits on the 18th green for the winner, a tradition Woodknows better than anyone. “To do it here Jack watching on the last hole .?.?. he means a lot to all of us as players,’’ Woods said. “We all looked up to him, and he’s the greatest champion that’s ever lived.’’

Spencer Levin, who had a one-shot lead going into the final round, lost the lead to Sabbatini with a two-shot swing on the par-3 12th, then took double bogey on the next hole to fall from contention. He closed with a 75, the same score he shot in the final round at Phoenix when he had a six-shot lead.

That was nothing compared with Rickie Fowler, who played in the second-to-last group with Woods to help generate an enormous gallery. Fowler opened with a birdie, and his day fell apart after that. With a double bogey on the last hole, he closed with an 84.

Woods finished at nine-under 279. It was the second time this year Woods has won in his final tuneup before a major. He won Bay Hill, but then tied for 40th at the Masters. The U.S. Open at Olympic Club starts on June 14 in San Francisco.

“That was some good stuff out there,’’ Woods said. “I never really missed a shot today.’’ AP