Where are the foreign phones?

Where are the foreign phones? 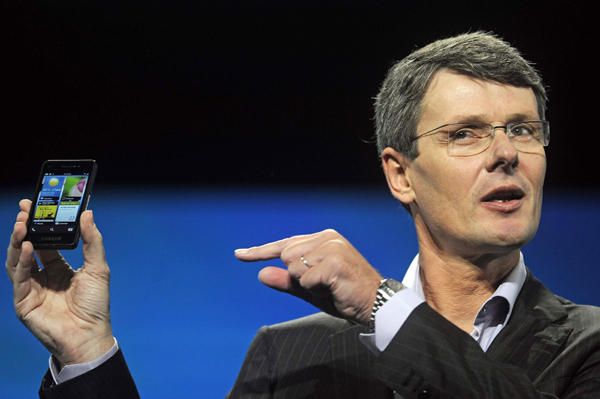 In this May 1 file photo, Thorsten Heins, president and CEO of Research In Motion, delivers a keynote speech during the BlackBerry World conference in Orlando, Florida. [AP]


Almost half of 2012 has gone by and not a single new foreign-made phone - including smartphones - have been put up for sale in Korea.

What’s more, Blackberry, Nokia, Sony, Motorola and HTC have announced no new models for the coming months, as they wait and see how the market is impacted by Samsung’s flagship Galaxy S3, which will hit the market later this month, and the successor to the iPhone 4S, which is expected in the second half.

Although Finnish producer Nokia debuted its Lumia 900 Windows phone for a relatively cheap $99.99 in the United States in April, Korean consumers are not likely see it in the near future, according to its Korean unit.

“We are watching the market at this moment before the big names arrive,” said a spokeswoman for Nokia in Korea.

The Lumia 900’s predecessor, the Lumia 710, debuted here last December and is sold exclusively through KT, one of three mobile carriers. Ever since entering the Korean market in 2009, Nokia has released four handsets including the Lumia 710.

The situation with Sony Mobile is no different. The Korean operation of the Japanese producer said in March it would release the Xperia S, a flagship Android handset, “soon” in Korea. However, a spokesman for the Korean operation of the Japanese handset maker, which has dropped its former Ericsson branding, said the “launch has been tentatively delayed.” 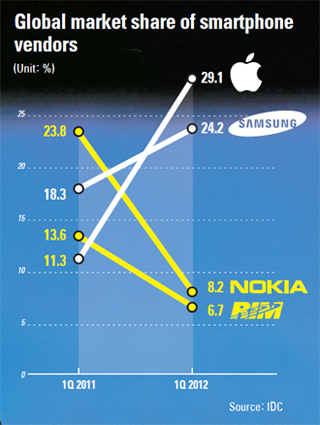 Only 159,400 units of foreign-made handsets were sold in the first three months of this year in Korea, while Samsung sold 2.5 million units - even after excluding Galaxy Note, a popular 5.3-inch mini tablet - and LG 1.04 million units.

RIM, which entered Korea in December 2008 exclusively through mobile carrier SK Telecom, has been suffering from a rapidly shrinking global market share and executive turnover. Its global market share among smartphones, which peaked at around 20 percent in 2009, has been on a speedy downward spiral since. In the first quarter of this year, its share of the pie stood at a mere 6.7 percent, less than one third of the figure three years earlier.

What’s worse, the brand may report its first quarterly operating loss since 2004 after a series of failed turnaround efforts and is expected to make significant reductions in spending and staffing. Rumors have also been swirling that Nokia, Facebook, Microsoft and IBM could consider buying the Canadian company.

“It’s true there have been a flurry of negative reports on BlackBerry’s performance,” said a spokeswoman for RIM’s Korean operation. “But RIM has recently unveiled the prototype for BlackBerry 10 operating system and we are banking on its release in the latter half, hoping it will become a significant game changer for us.”

Two months earlier, RIM seemed to have an upbeat outlook on markets outside North America and Europe, where it had been performing badly. Norm Lo, managing director of RIM Korea, told reporters in April that the handset producer was still expanding in Asia, citing Indonesia as an example of BlackBerry taking the No. 1 spot in handset sales.

But the former icon of coolness and connectivity among high income earners including investment bankers is now fast losing ground even here.

While its simple and easy-to-use Qwerty keyboard and email system have been counted as its competitive edge, users and analysts point to an enormously narrow choice of applications designed for the Blackberry.

“I have been using the BlackBerry Bold 9900 for the past six months and I’m regretting my choice of buying it,” a person with screen name AJ86 wrote on a Web bulletin board run by a group of hundreds of BlackBerry users in Korea. “The official version of KakaoTalk mobile messenger for BlackBerry was unveiled much, much later than for other smartphones. What’s even more annoying is I can’t use KakaoStory [a photo-sharing application affiliated with KakaoTalk], which is available with other platforms such as iOS and Android.”

Amid foreign brands’ consistently meager presence here - with the exception of Apple - Korean mobile carriers circulating them here have recently gone so far as to adopt the last resort of providing money-losing promotions to take some of those unpopular gadgets off their hands.

KT spent 150 million won ($127,000) in April to throw an event giving away Sony’s PlayStation 3 for free to customers purchasing the Motorola RAZR, which was launched here last October. In February, KT offered a 75 percent discount on Microsoft’s Xbox 360 to buyers of Nokia’s Lumia 710.

“We brought in foreign handset brands in a move to diversify our lineup,” said an official with one of three mobile carriers. “But the situation has changed a lot now and realistically we can’t really afford to circulate them when Korean phones sell incomparably better.”