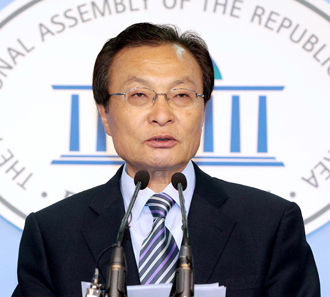 Lee Hae-chan, a contender to take over leadership of the opposition Democratic United Party, said yesterday it is diplomatically inappropriate for South Korea to intervene in the human rights situation in the North.

His remark, made in an interview with a local media outlet, was prompted by new moves by the ruling Saenuri Party to enact a so-called North Korean human rights law.

But coming in the wake of revelations of pro-North sympathies of opposition lawmakers, and after one of his own party colleagues called a North Korean defector a “traitor,” the comment is bound to boomerang on Lee and bring about accusations of being pro-Pyongyang.

“Politically speaking, one country deeply arguing over a domestic political problem of another country or intervening in it is a diplomatic discourtesy,” Lee said on a PBC radio show. “There is a human rights issue in North Korea. It is true they have it, but it is up to North Korea to deal with it. It’s not something other countries can intervene in.”

Lee said he sees no problem with human rights campaigns in North Korea conducted by non-governmental organizations such as Amnesty International or other groups.

The moderator of the show reminded Lee that the South Korean constitution does not recognize North Korea as a country. Lee responded that the world in general considers North Korea a country. He said its membership in the United Nations shows that the North is a state.

“Because the world recognizes it as a country, the United States does political negotiations with North Korea, so does China and Japan, right? We can’t say it is not recognized as a country,” Lee said.

Similar bills were submitted twice by Saenuri lawmakers in 2005 and 2008. Both failed due to opposition from the DUP, the largest opposition party.

“If we look at things from Lee Hae-chan’s perspective,” said Cho Gab-je, a conservative political commentator, on his blog, “the efforts by the United Nations and the international community to intervene in human rights abuses in Libya and Syria or in South Africa under apartheid would be interventions in domestic affairs.”

Cho said crimes against humanity such as massacres or terrorism acts have long been issues that transcend national borders, but Lee is “making illogical claims to defend the North Korean regime.”

Lee, a former prime minister in the Roh Moo-hyun administration, is trailing novelist-turned-politician Kim Han-gill in a close second in the DUP’s leadership primary. Its final result will be announced June 9 at the DUP’s national convention.