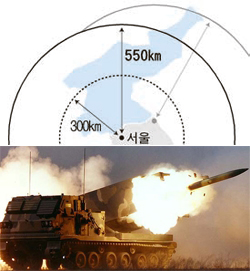 Seoul and Washington have made a tentative agreement to extend the range of the ballistic missiles from the South, currently limited to 300 kilometers (186 miles), to 550 kilometers, the JoongAng Ilbo reported yesterday, quoting a South Korean government source. The agreement will be made public during joint defense talks slated for later this month, the source said.

However, the Ministry of National Defense yesterday said there was no such agreement yet. An official of the ministry said, “We acknowledge the necessity [of extending the ballistic missile range] and will continue to talk with the U.S. on that matter.”

The entire area of North Korea comes within the extended range of ballistic missiles including Sinuiju, the North’s northwestern region, and Rason, the northeastern region, should the South launch the missiles from inter-Korean border areas in its northern region such as Gyeonggi or Gangwon.

“The U.S. took the stance to maintain the current missile range, but in order to cope with the expansion of the North’s missile capability, we agreed to extend it to 550 kilometers,” a high-ranking official of the South Korean government told the JoongAng Ilbo. “Initially, our government suggested it be extended to 1,000 kilometers, but it was adjusted through negotiations with the U.S.”

Seoul’s original stance was to make it possible for a ballistic missile to reach anywhere on the Korean Peninsula even if it is launched from the southern region of the South.

The U.S. showed little active response to it and the South then suggested it be increased to 800 kilometers, which it claimed enables ballistic missiles to reach the entire region of the peninsula when fired from the center of the South, according to the official.

The two sides appeared to be reaching an agreement over the 800-kilometer range proposal, but the U.S. finally put it aside, saying that it would put certain regions of China and Russia within the missile range, the official said.

The agreement “still requires us to go to the front line to launch” ballistic missiles, said a defense expert at a state-funded research institute in the South, speaking on the condition of anonymity, “But we have secured the means to ward off missiles or nuclear attacks from North Korea in advance.”

President Lee Myung-bak also mentioned the necessity of extending the ballistic missile range in an interview with a local media outlet in March, after the North announced a plan to launch a long-range rocket, widely thought of as a long-range missile.

The South Korean government official said the South and the U.S. reached the agreement through various channels and will announce it at the “two plus two” talks to be held this month in Washington.