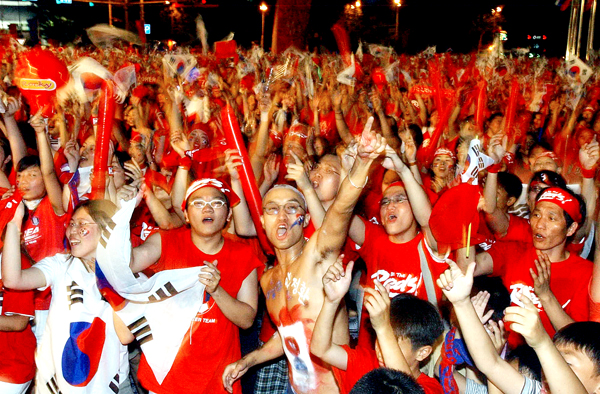 
At this time 10 years ago, Korea was covered in red. Red Devils swarmed the cities to cheer for the nation’s football team in the 2002 FIFA World Cup.

For many Koreans, the memory of the 2002 football event still remains vivid in their minds. That year Korea reached the semifinals and became the first Asian country to get that far. It was a dream come true, a fairy tale that still moves the hearts of Koreans to this day.

Korean football has changed a lot since the 2002 World Cup. In terms of quantity, the infrastructure of football has beefed up.

According to the Korea Football Association, there are about 24,000 players registered in the local football governing body, nearly 7000 more than in 2002. The number of coaches has also increased from 931 to 1,556. Six clubs have joined the K-League since the 2002 WC, creating a 16-club league format.

The 2002 event also provided a good bridge for footballers to play abroad. For instance, Park Ji-sung and Lee Young-pyo found themselves playing in Europe after showing an impressive performance in the World Cup. The value of Korean players dramatically increased after 2002.

However, there are still things that the 2002 World Cup couldn’t help all by itself.

During the third-place match at the 2002 World Cup, Korea versus Turkey, fans held up posters that read “CU @ K-League,” hoping that the football fever would shift to the domestic football league. But after 10 years, the popularity of domestic football has taken a step back.

Although the K-League changed its attendance record system this year to keep a more accurate record, the average attendance per match is now about 8000, more than 7000 below that of what was being reported in 2002.

It is no secret in Korea that the No. 1 sport is baseball. The attendance at the Korea Baseball Organization games makes headlines almost every week and their goal of drawing 7 million fans in one season looks to be a possibility.

There were certainly times that the KBO was just another professional sport. But after having impressive performances in the World Baseball Classic, the Asian Games and the Olympics, the KBO didn’t miss the chance to carry that excitement for baseball over to the domestic league.

These days, KBO marketing is effective and fans are willing to watch the game. Many people now see baseball stadiums as a place for picnics as much as sports, while all four games of the KBO are broadcast on television each day.

For the K-League, the 2002 event was a great opportunity to increase its fan base, but after 10 years it still can’t hold a candle to the KBO. Fans do visit stadiums, but mainly they are club supporters. Meanwhile, TV coverage of K-League matches is still limited compared to that of the KBO.

Pundits have their own opinion as to why the K-League failed to capitalize on the popularity of the World Cup. Some say that football fans have turned to high-level football leagues like the English Premier League, while others say the K-League lost fans with the match-fixing scandal last year.

Marking the 10th anniversary of the 2002 World Cup glory, the K-League officials are trying to improve the situation. The league has adopted a “split system” where one team will be relegated from the top division.

On July 5, the All-Star Game will be a special match between K-League All-Stars and the 2002 World Cup squad.

However, what’s more important for the league is that it needs to build up a stable and sustainable system to bring fans regularly to the sport and build up a healthier football environment from the bottom.

In fact, the 10th anniversary should not end as just another year, but should be a good opportunity to move toward that goal.

If the last decade was about domestic football upgrading its “hardware,” the next decade should be about enhancing our football culture’s “software.”

Let’s evaluate our youth football, management of football stadiums, the welfare of players and examine what clubs and players are doing to make the K-League more exciting.

Fans need to turn their eyes to football and show support like they did during the 2002 World Cup. If everything goes well, the crowning moment of 2002 may happen again before 2022. Who knows?