One-time ace hurler looks to get mojo back

One-time ace hurler looks to get mojo back 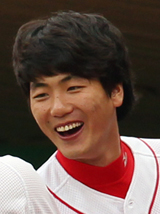 He’s not back to his old form, but at long last SK Wyverns pitcher Kim Kwang-hyun is back in the Korea Baseball Organization. The left-hander, who has suffered a series of injuries since last year, took the mound last Saturday against the Kia Tigers and collected a win for the first time in 356 days.

At Munhak Baseball Stadium in Incheon, the 24-year-old contained the Tigers batters for five innings without giving up a run. He had 79 pitches with a fastball clocked at a high of 148 kilometers per hour (92 miles per hour).

“I’m just happy to be playing in the top division again, but it’s fortunate that the result also turned out to be great,” Kim told Ilgan Sports, the JoongAng Ilbo’s sports daily, on Sunday. “It felt like now I’m really back in the KBO.”

Kim pitched for the first time since October 28, last year, when his team was in the Korean Series against the Samsung Lions. The pitcher admitted that he was nervous like it was his rookie year.

“When the national anthem was playing before the game, my legs started to shake,” Kim said.

Kim was considered a top three pitcher in the KBO until he got injured. He made his professional debut in 2007 after graduating from Ansan Technical High School. In his sophomore year, he topped in wins (16) and strikeouts (150) while helping Korea win the gold medal in the Olympics.

In 2009, Kim ended up the league leader in ERA and winning percentage, but he was forced to end the season in August with a wrist injury. In the following year, he was once again the top pitcher in wins (17), while taking second place in ERA (2.37) and strikeouts (183).

For this year, Kim started in the minors to rebuild his form after going through rehabilitation on his left shoulder. His minor league performance wasn’t good - collecting two losses with a 7.20 ERA in three games, but Kim said he wasn’t disappointed.

“Even if my performance wasn’t good and my pitching wasn’t great, the coaching staff kept encouraging me,” Kim said. “That’s why I didn’t lose my confidence and managed to come back on the first team roster.”

During his stay in the minors, Kim said he tried not to watch KBO games since it would make him want to come back to the league too quickly when he saw the other pitchers succeeding.

“I was careful during that time since I didn’t want to rush my return,” Kim said. “However, I now regret not analyzing hitters by watching baseball games.”

The Wyverns manager Lee Man-soo and pitching coach Sung Joon say they are glad Kim has returned, but acknowledged that the southpaw is not 100-percent fit. Kim also knows he doesn’t perform like in his old days, but is determined to finish the season healthy.