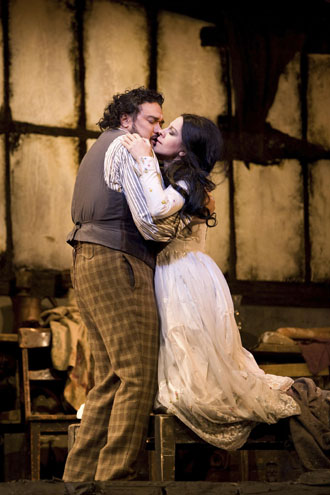 “La Boheme” will be presented by the French production team of the Orange Opera Festival at the amphitheater of Yonsei University from Aug. 28 to Sept. 2. Provided by the organizer

The unamplified human voice has long been a hallmark of classical opera. Not long ago, the use of microphones in a major opera house would have provoked a storm of criticism.

Korean opera fans, however, never had the chance to experience the beauty of natural voices in outdoor performances unless they visited venues in Europe, such as the Theatre Antique d’Orange in France, site of the world famous Orange Opera Festival.

But this summer, aficionados will have the opportunity to listen to the sounds of opera as they were meant to be heard for the first time in Korea when the Orange Festival production of “La Boheme” comes to Seoul for four performances. Puccini’s classic opera will be performed without amplification on the outdoor stage at Yonsei University’s amphitheater.

“I frequently visited Yonsei University and watched pop concerts at the amphitheater, but I never pictured an opera performance being presented there. But one day, I walked past the empty theater and suddenly realized that this semicircle theater is perfect to stage an opera, as it allows the beautiful echoing of natural sounds,” said Park Pyoung-jun, artistic director of Amici Della Lirica, during a press conference Monday. “So I immediately sought advice from professionals to bring in an opera performance for the Korean audience.”

The first outdoor opera performance in Korea was “Turandot” at the World Cup Stadium, western Seoul, in May 2003. Several more opera performances followed in outdoor venues including the Olympic Stadium in Jamsil and Olympic Park, southern and eastern Seoul, respectively.

However, it was inevitable for those performances to rely on amplification systems.

According to organizers of the Orange Festival, Yonsei University’s amphitheater resembles the famous Theatre Antique d’Orange in France - where “La Boheme” will be performed before coming to Seoul - “in terms of size and the capabilities to resonate natural sounds.”

Yonsei University’s amphitheater can seat 7,500 people while the Theatre Antique d’Orange can hold about 8,500.

French director Nadine Duffaut described the acoustics of the two venues as being very similar. “The amphitheater at Yonsei University is a perfect outdoor stage for opera that allows beautiful natural sound without using electro-acoustics,” said Duffaut. She will direct “La Boheme” in France in July and then the four performances in Seoul starting August 28.

Maestro Chung Myung-whun, who conduct the Seoul Philharmonic Orchestra for “La Boheme” took the musicians to the amphitheater of Yonsei University to test the sound, according to Park.

“When I asked him to conduct the orchestra for ‘La Boheme’ at the amphitheater, he hesitated at first because he has never heard of this venue,” said Park, the artistic director. “But when he tested the sound with the orchestra he said it was an amazing venue for an outdoor opera and asked back why classical concerts or operas had never been performed in such a perfect venue.”

Also a close to perfect is the collaboration of Chung, Duffaut and a cast featuring Angela Gheorghiu in the role of Mimi and Vittorio Grigolo as Rodolfo.

“If such a performance becomes a box-office failure, I think that signals the end of any opera performances in Korea,” said Chang Gil-hwang, producer of the upcoming “La Boheme.”