The Fair Trade Commission (FTC) fined eight local construction companies yesterday for colluding to match prices when bidding for parts of the four-rivers restoration project tendered by the government.

It fined them a total of 111.5 billion won ($99.4 million) for forming a secret pact aimed at erasing competition by allocating projects to one another. Eleven more companies received either warnings or orders to correct their unfair practices. 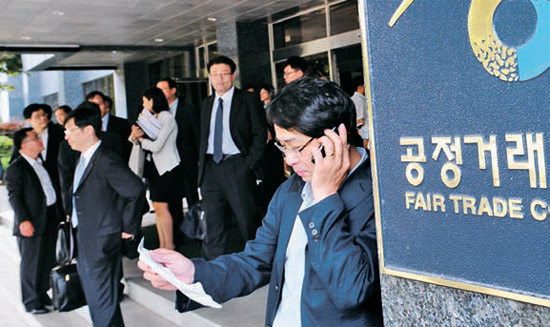 The decision came after suspicions of collusion surfaced in October 2009 at the behest of then opposition party lawmaker Lee Suk-hyun.

The FTC said executives met at hotels in Seoul in September of that year to divvy up the turn-key projects - which involve both planning and construction - ahead of the bids. So far the government has released the results of two rounds of bidding but the FTC said it only found unfair practices in the first round. It said it acquired evidence proving this and also showing how the companies supported each other’s bids in different ways.

The Citizen’s Coalition for Economic Justice (CCEJ) claims this convoluted process resulted in the government paying them an additional 1.2 trillion won for the projects, money they would not have received had they not colluded.

After Lee raised his suspicions during a parliamentary inspection in October 2009, the FTC established four investigative teams to look into the possibility of unfair practices having taken place.

Then FTC Chairman Jeong Ho-yeol said in November of that year the commission “had dug up some things that could be related to collusion.”

“The four-rivers restoration project involves so many companies that it was difficult to collect all the evidence, and this is why the decision was such a long time coming,” Shin added.

The construction companies deny the charge.

“It’s unfair to impose fines on companies that worked on the government projects, which weren’t even attractive from the beginning,” said one official at a major construction company.

“The government forced the companies to participate, and now it is accusing them of unfair practices.”

Some claim that the amount they spent on construction was 6 to 10 percent higher than the approved price during the bidding process.

However, the CCEJ said in a release that the fine was too small in relation to the average revenue of 4 trillion won each company reaped from its shady dealings.

“As turn-key projects are notorious for creating leeway for collusion among construction companies, this corrosive practice must be stopped,” the CCEJ said yesterday.

The four-rivers restoration project is one of the top priorities of the current administration as it pushed to refurbish the country’s four major waterways, namely, the Han, Nakdong, Geum and Yeongsan rivers.

Seoul is set to spend at least 15 trillion won on the project, according to the Ministry of Land, Transportation and Maritime Affairs.