KARA named one of Korea’s 10 gems

KARA named one of Korea’s 10 gems 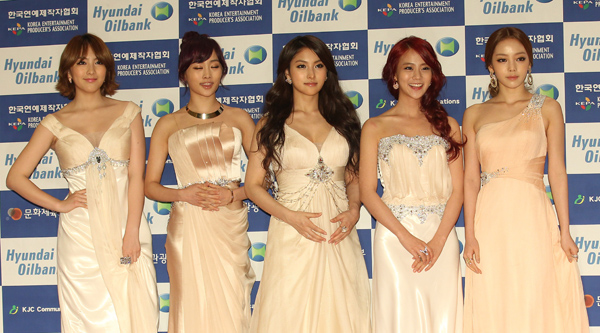 
Girl group KARA has received the honor of being named one of Korea’s 10 “Stars” by the Korea Tourism’s Star Organization for the 2012 Korea Tourism Awards, which is hosted by the state-run tourism bureau in Korea.

KARA was named a “Star” within the Special Segment Category while other nine “Stars” selected were mostly hotspots and organizations that benefited the tourism industry around the nation such as the Pine Tree Forest near Mount Kumgang in Gangwon and Suwon Fortress in Gyeonggi.

KARA was thought to be an influential K-pop group that prompted Japanese tourists to visit Korea, which resulted in the girl group being selected.
More than 29,099 respondents took part in the survey this year.

An awards ceremony for the nominees will take place at Chongdong Theater in Jung District, central Seoul, on June 12.
By Carla Sunwoo [carlasunwoo@joongang.co.kr]